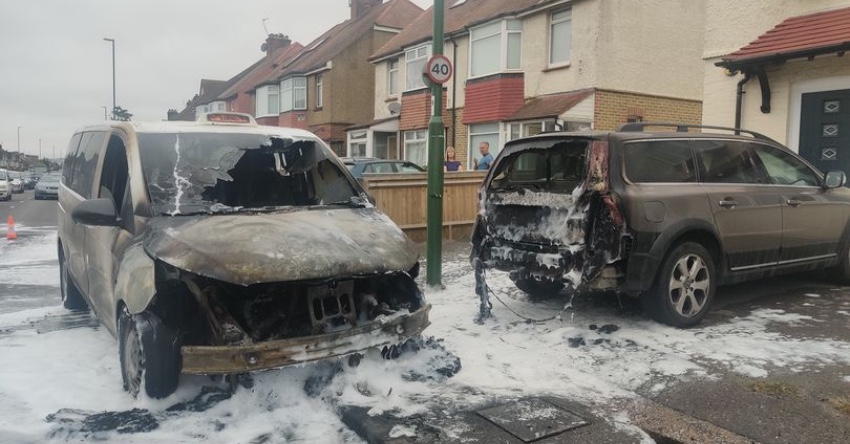 A Brighton and Hove taxi set alight on the Old Shoreham Road between Southwick and Portslade on Wednesday 3 August, setting a nearby car on fire too.

SussexLive reports that the taxi, which had smoke coming out the front of the car, pulled over by a driveway on the Old Shoreham Road before setting on fire, with the flames then spreading to the neighbouring vehicle.

With firefighters on the scene to tackle the blaze, traffic along the busy road was redirected by helpers as the road was blocked off for almost an hour.

The road re-opened again at around 12.20pm, with police on the scene to mark flags around the remains of the taxi.

A statement from East Sussex Fire and Rescue Service who attended the scene read: "We were called at 11.34am to attend a car fire on Old Shoreham Road, Southwick. Firefighters from Hove and West Sussex FRS attended.

"Firefighters used one Breathing Apparatus and dry foam to extinguish the fire."

While it was the taxi that was originally on fire, the flames quickly spread to a nearby car parked on a driveway, burning the back of their car completely.

The fire service used dry foam to extinguish the flames from both cars, which have been destroyed by the flames.

Although cars were being diverted away from the area, with many being sent down neighbouring roads, plenty of onlookers were watching the incident from a distance, with some people looking out their house windows. Thankfully, no one was injured from the car fires.

The East Sussex Fire and Rescue Service said: "We left the scene at 12.29pm. The incident is under investigation."