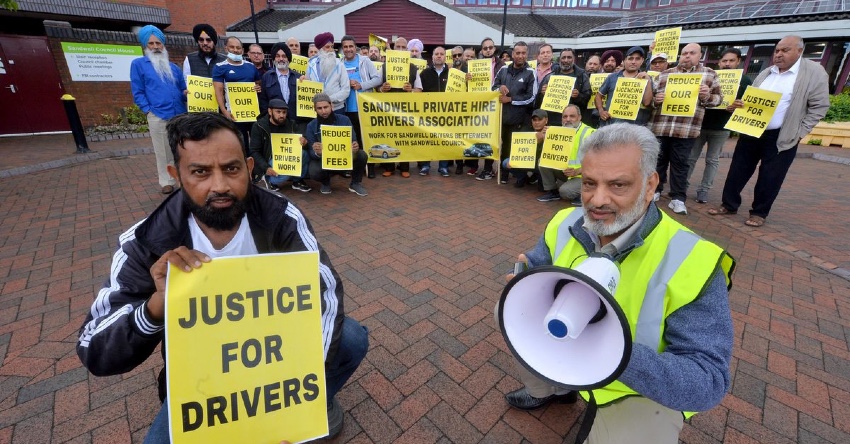 The continuing dispute between private hire drivers and Sandwell Council has seen another protest take place.

According to the Express and Star, more than 100 private hire drivers joined a protest outside Sandwell Council house on Tuesday, 24 May, to voice their continued demands for the council to talk to them about long delays and high prices for licence renewals in the borough.

It was the latest in a number of protests by members of the Sandwell Private Hire Drivers Association (SPHDA), following on from a go-slow protest around the streets of West Bromwich and other parts of the borough on May 4.

It currently takes between nine and 12 months for new applications for a private hire licence to be processed in Sandwell, compared with around three weeks in Wolverhampton.

Additionally, a one-year taxi plate costs £353 for a vehicle under five years old, and £399 if it is older, if the vehicle is registered with Sandwell Council, with other councils charging much less.

SPHDA chairman Mohammed Niwaz said the protest had been necessary due to what he described as a lack of communication and consideration from the leader of the council, Kerrie Carmichael.

He said: "We were supposed to have a meeting in March about this, but she claimed to know nothing about it and said it would be rearranged for another month, but then she said the local elections meant she would need to do it another time.

"Finally, she comes back to us with a date of June 15 to meet about this so, at that point, we wrote back to her saying that she is not being serious enough about talking to drivers after we had waited for so long.

"That's why we decided to protest outside the council house on Tuesday as we want them to understand that we want justice, we want our fees reduced and more help with MOTs and help reducing our costs."

Mr Niwaz said there had been no response from any member of the council during the protest and said that if they heard nothing in the coming week, they were prepared to do more protests.

He said: "If the council leader or any member of the council doesn't come back to us with a new date, we are prepared to demonstrate again with either a go-slow or a protest on June 7 when they have a full council meeting.

"We want them to sit with us and see what they are offering so that we can move forward, but it doesn't feel like anything is set to happen yet, so we will continue to protest until something does happen."

A spokesman for Sandwell Council said: "We are making a number of improvements to our taxi licensing service in response to issues raised by the taxi trade and in support of our licensed drivers and operators.

"This includes the introduction of new licensing software to enable online applications and payments.

"We regularly meet with representatives of private hire drivers and provide updates on progress with service improvements.

"We are committed to making further changes to improve the licensing process and ensure consistent standards for taxi and private hire passengers."