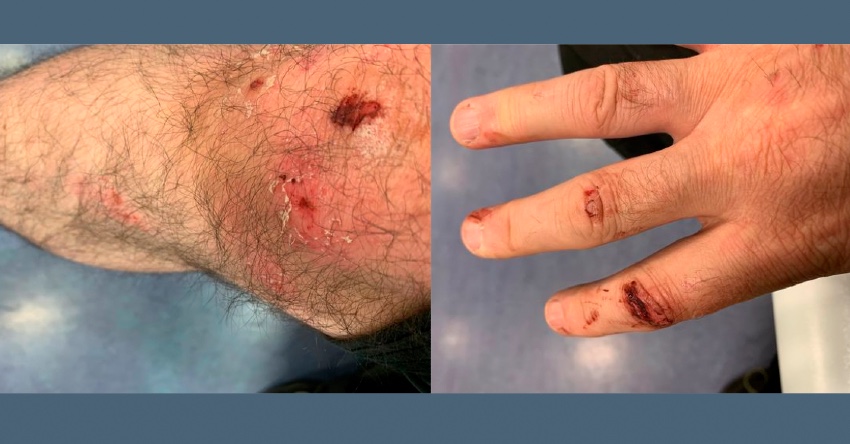 A taxi driver claims he was attacked by a couple after one was sick in his cab and then refused to pay the cleaning fee.

The Manchester Evening News reports that Koorosh Afshari said he was dragged out of his car and attacked after taking the passengers to Partington, Trafford, from the city centre.

The 48-year-old was left in tears with ripped clothes and scratch marks all over his body.

Koorosh said the female passenger had been sick in the back of the taxi. When he questioned the couple, he says the male passenger 'blamed it on the heating' in the car.

Koorosh stopped and said he told the couple he would be charging them a cleaning fee.

Angered, he claimed the male passenger then left the vehicle before he asked the woman to pay for the journey which took place on Saturday 20 November.

He says she refused and only offered to pay £10 for the whole trip - despite it costing £34 and then £20 in cleaning fees.

Koorosh was then dragged out of the car as he called police to report the passengers' details.

The taxi driver said: "He was shouting at me and screaming and just opened the door and pulled me out.

"I was in so much pain and was crying. I was on the floor and was trying to push him off"

The argument caught the attention of nearby resident Michelle, who ushered taxi driver Koorosh into her house and called for help.

Cabbie Koorosh called Michelle an 'angel' for helping him.

Injured and with a painful shoulder, he drove himself to A&E where he was checked over and sent home.

Greater Manchester Police confirmed they are still investigating the incident and enquiries are ongoing.