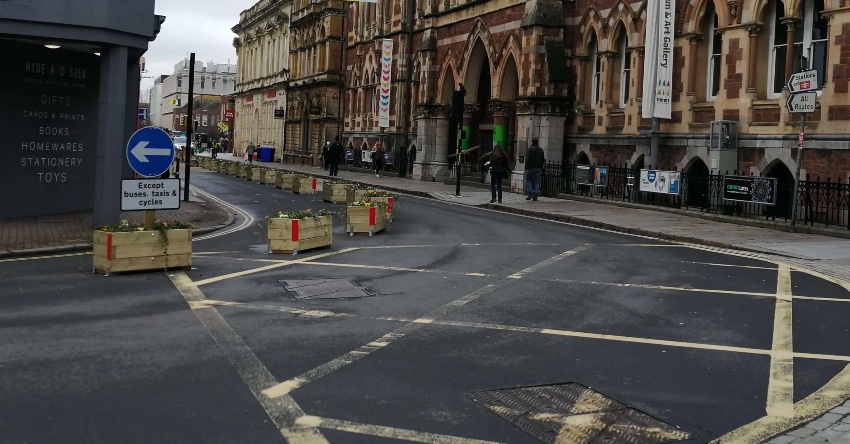 Active travel schemes in Exeter may have led to a million more miles a year being driven by taxis being forced to navigate round one-way systems.

According to DevonLive, Devon County Council introduced a number of temporary measures in the city and other parts of the county last year, providing what they claim are safer routes for higher numbers of people walking and cycling following the Covid outbreak. Some of the temporary changes have since been made permanent.

But according to a councillor who has totted up the average additional carbon emissions incurred, there have been unintended consequences which have led to those who need to still drive through Exeter adding huge numbers of miles to their journeys.

Speaking at a meeting of the Exeter Highways and Traffic Orders Committee (HATOC) on Monday, Cllr Peter Holland acknowledged the schemes had helped cyclists and improved the areas for residents.

But he said: “The Royal Mail use telemetry on all of their vehicles and taking just one van which serves Ludwell Lane, one of the schemes, it has measured an additional 20 miles a week to the eight delivery points at the bottom of the lane.

“This grosses up to 1,040 additional miles per year. According to government figures and depending on the type of fuel and the size of vehicle and engine, this one journey over the course of a year generates 83.3kg of carbon emissions.

“The taxi trade has, as of September 29, 2021, 482 vehicles – each recording on average ten additional miles a day to navigate the road changes on behalf of their customers.

“Working on a five day week and a 48-week year – some actually do more – this grosses up to over a million miles a year. The figure for carbon emissions in kilograms is phenomenal.

“The taxi trade is but one sector which uses our roads. I class them as an essential service. Much of their bread and butter activity during the day is to carry vulnerable people. None of these people can hop on a bike or walk. Public transport is patchy to say the least and not hugely reliable.”

Cllr Holland added that roads outside of the schemes are seeing increased traffic volumes and therefore poorer air quality, affecting residents’ qualities of life, while also leading to longer commutes for care workers and health visitors.

“The schemes are well received by some, but I fear that at a stroke Devon County Council has alienated a section of the wider community,” he said, with him requesting the committee ensured all stakeholders, including the Royal Mail and taxi trade, are formally consulted on future road changes.

The HATOC was also asked to pause further schemes until a “lack of meaningful consultation,” congestion and air quality has been addressed, and that residents are able to choose ‘no action to be taken’ as an option on consultations.

In response, Will Pratt, the council’s lead for transport, strategy and infrastructure delivery in Exeter, said: “In relation to air quality, I think it is right there is a level of scrutiny of this, and when we have air quality data, which is published annually, we will be able to provide more information on that.”

After Cllr Holland claimed the Royal Mail and taxi trade hadn’t been consulted on the active travel changes, Mr Pratt said the hackney carriage association had been spoken to about the one-way setup on Queen Street and that all permanent changes are subject to ‘traffic regulation orders’ to which both organisations are able to respond.