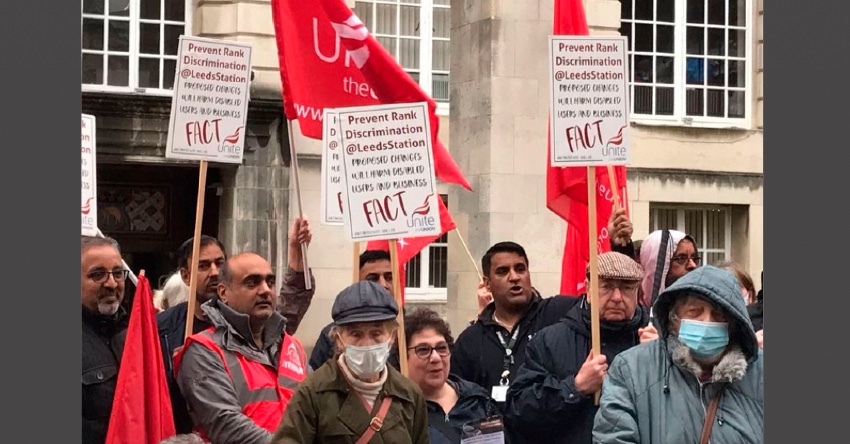 Taxi drivers and disabled campaigners came together to protest a council plan to move the taxi rank further away from the entrance to Leeds Railway Station.

LeedsLive reports that as part of a 340m revamp of the Leeds station area, earmarked for completion in 2023, New Station Street is set to be pedestrianised all the way to Boar Lane.

This would mean moving the taxi rank at the station entrance down onto Bishopgate, in front of the Scarborough Hotel.

While the plan includes provision for two passenger lifts and "wider, safer steps" to help elderly and disabled passengers reach the new taxi rank, protesters outside Civic Hall argued they had been excluded.

"For many people passenger lifts are inaccessible," explained Tim McSharry from Access and Use-Ability Group (AUAG).

"Whether it's due to autism or guide dogs - a lot of guide dogs don't like using passenger lifts - and the lifts can also break."

The AUAG wants to bring Leeds City Council, Network Rail and the West Yorkshire Combined Authority back to the table to find a workable solution.

He added: ""We're hoping logic and common sense will win out."

Taxi drivers are not happy about the proposals either.

Currently, there is space for 33 cars at the New Station Street taxi rank, while the new rank on Bishopgate will have room for just six.

Drivers waiting to join the rank will need to queue on Sovereign Street, around the back of the station, but the Leeds branch chairman of Unite the Union, Vasim Akhtar, said this will not work.

Vasim said: "What happens when a London train arrives and you've got 100 people there, or on a Leeds United matchday outside The Scarborough Hotel, or on a Friday or Saturday night.

"When those taxis are called from Sovereign Street they're going to have to negotiate through traffic, through the general public. How long is that going to take?

"People are going to try steal taxis, it's going to cause fights.

A Leeds City Council spokesperson said: "The proposed move means that people will no longer have to cross a busy road to access the taxi rank, and with the number of people using Leeds Station expected to rise significantly over the coming years it will also make it easier for people to travel to and from the station using what is already a very busy street.

"Throughout this we’ve worked with representatives from disabled access groups across the city to discuss the proposals and helped shape the design to address their needs.

“At the request of Leeds City Council’s Access and Useability Group, we explored alternative options for the location of the taxi rank but unfortunately these were not feasible.

"We will continue to consider any proposals or suggestions to enhance the design further, as we finalise our scheme.”