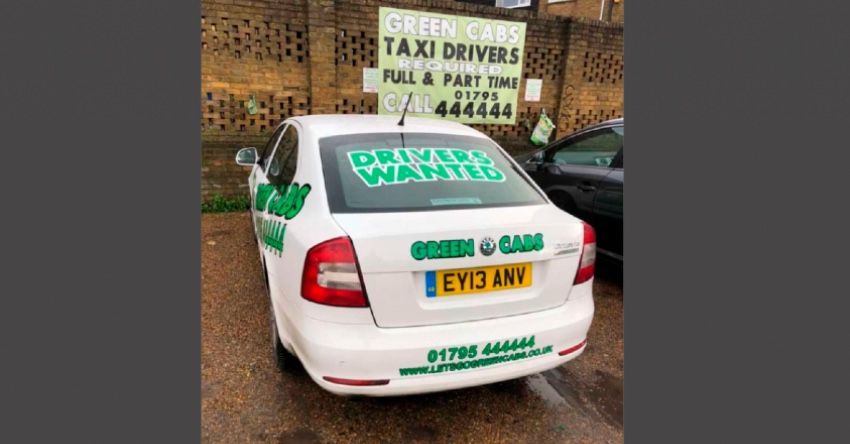 A shortage of taxi drivers due to cabbies finding new jobs because of the pandemic has led to an onslaught of abuse hurled at firms.

According to KentOnline, that’s the experience of Let’s Go Green Cabs, in Sittingbourne, who were forced to ask annoyed customers to be patient and not abuse staff when there was a waiting time for journeys, or people had to be turned down.

The Covid-19 crisis saw the High Street business lose nearly half its staff as drivers feared the lockdowns would affect their jobs.

Around six people left the Sittingbourne taxi firm, with many going on to deliver for supermarket giants who were recruiting.

The lack of staff meant that the number of bookings the company could take was limited, and as a result people were getting more and more angered when told they couldn’t be accommodated.

Unfortunately, this has led to an onslaught of abuse, often directed to the control centre, as well as drivers themselves.

Owner Nicholas Childs was forced to make a plea to customers to be patient.

Addressing the public, he said: “We are trying our best to find new or existing drivers so that we can fulfil your needs when you need a taxi.

“Please can you not moan at the drivers or controllers when getting in a taxi or trying to book a taxi, it’s not their fault for the lack of taxis in Sittingbourne.”

Green Cabs assistant manager Gary Normile explained the company would have around 12 drivers at the weekend but it has now been left with around five or six.

He said: “It’s a county-wide, even a country-wide, thing. Taxi firms are struggling.

“We’re having problems getting new drivers in as they’re coming from outside Sittingbourne but need to pass a knowledge test of the roads in the borough.

“It might help out if Swale council was able to be a bit more lenient as businesses are suffering financially.

“Everyone is facing the same thing though and suffering the brunt of it.”

And it's a similar situation for cab firm bosses in Thanet who are also blaming the shortage of drivers and the over-complicated recruitment process for lengthy waits for taxis in the area.

Customers needing a ride in Thanet are currently facing long waiting times, late arrivals or no availability at all.

Managers of the Isle's firms say they are desperate to provide a quality service for the community, but it has become increasingly hard after losing a third of their drivers during the pandemic.

They add that recruitment is particularly difficult, with a compulsory drivers knowledge test - set by Thanet District Council - so hard that only a tiny proportion of prospective new drivers are passing on the first or second attempt.

Maria Seager, director of Central Cars, says they are doing all they can.

"We just haven't got enough drivers on the road," she said.

"The number has dropped by a third across the whole of Thanet. But it's not just here, it's a nationwide problem."

Mrs Seager says that while they managed to continue working throughout the pandemic, some foreign national drivers left to go back to their home countries, while others retired early due to not wanting to work during Covid-19.

Others got jobs at firms such as Deliveroo and Just Eat.

"Demand for taxis suddenly increased when restrictions started to ease, but we have less drivers and we end up having to give such long waits," she said.

"We are still providing a service, that's important for people to know, but what used to be a 10 to 15-minute wait is now 30 to 40 minutes, and at the weekend it's an hour.

"It's heartbreaking to find ourselves in this situation."

She says the problem with the lack of drivers is made worse by the lengthy and difficult process to recruit.

A prospective driver must carry out a stringent knowledge test - covering safety, money, the highway code and licensing laws - as well as have a good knowledge of Thanet's roads.

"Thanet council wants to improve standards, and that's right, but it's really difficult to pass," she said.

Andy Doody, of Thanet Cars, has been in the industry for 40 years and took the test.

"It's so difficult that even those of us experienced in the industry are finding it hard to pass," he said. "No new drivers are coming through because the application process takes so long and is too difficult.

"Only something like 5% are getting through it first or second time. We want the application process to be there, but it needs to be simplified.

"There's got to be maths, manual handling, safety and all those other things, plus a reasonable knowledge of Thanet. But every car is fitted with a sat nav anyway.

"They're making it more difficult than it needs to be."

The matter has been raised with Cllr Sam Bambridge, chair of the licensing board at Thanet District Council, who is due to take the test to see how hard it is.

A Thanet District Council spokesperson said: "The issue of driver shortages is not restricted to private hire drivers or even to the Thanet area. Discussions at a Kent-wide meeting in July identified this as a county-wide matter affecting drivers in a range of roles in a number of locations.

"We regularly hold test sessions and demand has remained steady in recent months. The pass rate is on the increase and some applicants have passed the test at their first sitting. Drivers are advised that they should invest time in study and revision prior to taking the test to increase the likelihood of passing."