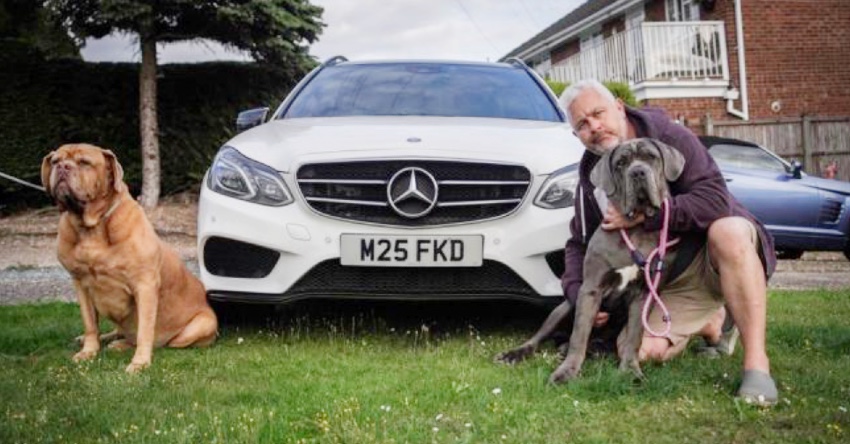 A chauffeur in Dartford has mocked the 'constant' traffic woes he experiences between London and Kent after personalising his number plate to 'M25 FKD'.

News Shopper reports that Justin Scrutton, the owner of the ingenious licence plate, said he's had people honk, wave and give him thumbs up as they've driven by in recent weeks.

The not-so-subtle message behind the personalised number plate comes after years of sitting in queues along the M25 for his airport taxi service Justin Time Travel.

"It's one big bottleneck, and it's a constant pain in my neck," said Justin, who lives in Dartford near Bluewater.

"The traffic is awful around here and has been for years. There are times of the day when you just cannot feasibly travel, and you know if one of the big crossings closes for one reason or another, no one's getting home for hours.

"I have to check my phone just to pop to the shops or risk being stuck in traffic for hours."

But Justin, 49, said that "if you can't change something you just get used to it, but you might as well make fun of it."

After coming up with the mischievous idea, he checked to see if the number was free before trading his old plate in and grabbing the new one for £250.

"When I saw it was free I thought no way, I'm definitely having that, and I wanted to take it before someone else gets the idea.

"It's my personal car, not one I use for work, my dog car really, so I only really drive it locally. And I'm just trying to make people smile."

He said people seemed to find the number plate funny, but that he tries to avoid going on the M25 at all costs.

With traffic from London, Kent and Essex all bottled into one area and on just a couple of crossings, Justin points out that the traffic has been getting progressively worse for years.

"It's my drivers I feel for, there's no way you'd catch me on the M25 on a Friday afternoon."

Justin said he welcomes the proposals for the new Lower Thames Crossing to lessen the load.

"They should be building a third crossing, the roads weren't designed for this level of traffic."