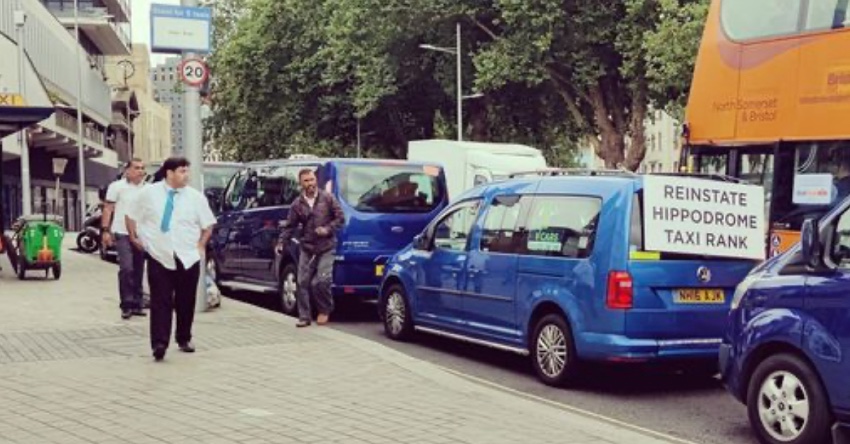 Taxi drivers are holding up traffic in Bristol city centre today (Wednesday, September 1) in a protest which is set to cause major disruption in the city centre.

According to the Bristol Post, the Bristol Blue Licensed Taxi Association and Bristol Hackney drivers will stage a slow-moving blockade protest between 7.30am and 10am, starting in Brunswick Square and ending at the Hippodrome.

The drivers, who will also go through Bond Street, the Haymarket and Rupert Street, have been angered by Bristol City Council's decision to close the taxi rank outside the Hippodrome.

Cab drivers say that the Hippodrome rank accounts for two thirds of all hackney carriage work in the city.

The taxi drivers allege that the council has started to issue fines at the Hippodrome ticket office, the location where the taxi rank was removed from, and that there have been over 80 Penalty Charge Notices issued within a few days. They believe this is unfair.

The council say that around 350 PCN's have been issued since full enforcement restarted at the beginning of August. The PCNs are for £70, reduced to £35 if paid within 14 days of issue.

A similar protest also took place in April, and the strike action is intended to be repeated in subsequent weeks ahead, and potentially intensified, if the council do not listen to their demands.

A spokesperson for the council said: "We have worked with representatives of the taxi trade to install an evening/late night rank with a shelter and improved signage 50 metres away from the Hippodrome.

"A larger rank with shelter and signage opposite the Cenotaph has also been installed. However, we have been clear that the concerns for public safety and congestion issues outside the Hippodrome make it an unsafe location for a taxi rank."

"Other than buses, there should be no vehicles parked in the area in front of the Hippodrome, which is a bus stop.

"Enforcement action to issue penalty charge notices here began last year. Where a driver feels a notice has been issued incorrectly, they can appeal via the methods indicated on the notice."

Saif Hussain, Chairperson of the Bristol Blue Licensed Taxi Association and one of the cab drivers in the protest, said the protest is going well but he's worried about blocking ambulances.

"They have a right to be annoyed and we're sorry for that but we have to do our demonstration."

A bus driver said he was warned this would happen and expected them to block the road because they did last time.

He was waiting in traffic for about 25 minutes. He said: "I can understand it for them but I can't understand why they have to block the only way to the centre."

Traffic in the area is being severely held up due to the protest.