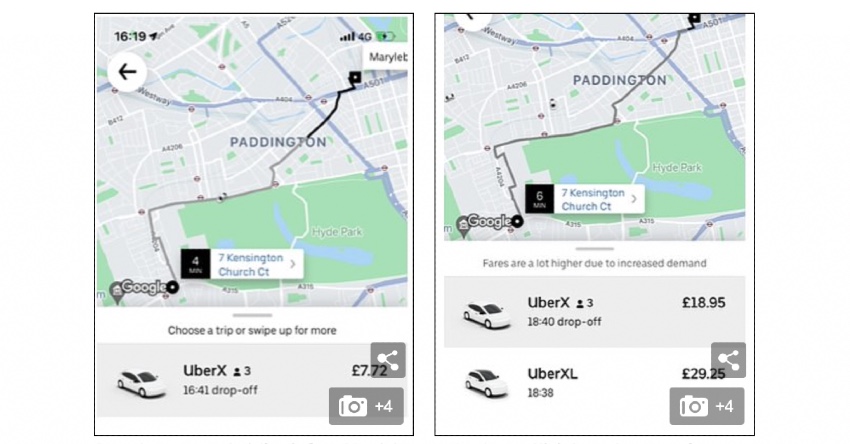 Uber users say they have been hit with surging prices for their usual rides, after the number of private hire drivers was decimated during the peak of the pandemic.

Some riders have complained of fare prices more than doubling in some cases and a lack of available drivers in the area since the lockdown.

According to the Daily Mail, industry experts have warned that this may be the tip of the iceberg, and that there has 'never been a worse time' to be an Uber driver after price model changes.

Denise Beighton took to Twitter saying how a £10-15 four-mile trip unexpectedly ended up costing her £47.

She wrote: "I complained to customer services and they've offered me a £10 credit note."

For another regular customer, her daily trip from Marylebone to Kensington High Street has more than doubled in price, from £7 to over £18 in recent weeks.

On the Uber app, it informs her that prices have risen because of 'increased demand'.

She said: "I tried to book three times, saw how much it was going to cost me, and then gave up and hailed a black cab. It was six quid cheaper and I didn't have to wait eight minutes for it."

Last month, Londoners hit out at Uber for 'costing more than a black cab' - but the company insists it has not raised prices in two years.

The national shortage in PHV and taxi drivers could have lasting implications. Although taxi and private hire firms are seeing increased levels of demand, there has been a widely reported 40 per cent drop in the number of drivers across the UK.

Many gave up on the industry when lockdown restrictions cut all journeys that were 'non-essential' and instead turned to delivery driving.

While the pandemic crippled the financial returns of hundreds of thousands of businesses, Uber was no different. Its revenue from its taxi business almost halved, reports the Telegraph, from approximately $10.7billion (£7.7bn) to $6.1bn (£4.4bn).

With draconian restrictions easing, passengers have been returning to big cities and looking for familiarly cheap fares from Uber.

James Farrar, a representative at App Drivers and Couriers Union, says there are multiple reasons why drivers left the industry and won't be returning any time soon.

He said: "The pandemic had a crippling psychological effect on drivers, meaning many turned away from the profession and simply haven't returned.

"Look at private hire and taxi drivers' death rates, they were among the highest. The 80 per cent pay they received when they had no work didn't help with the fixed costs of paying for their vehicles, meaning many had to sell up or face huge debts."

He also criticised Uber for changing its pricing model last October from a time and distance-based fare, to a fixed price.