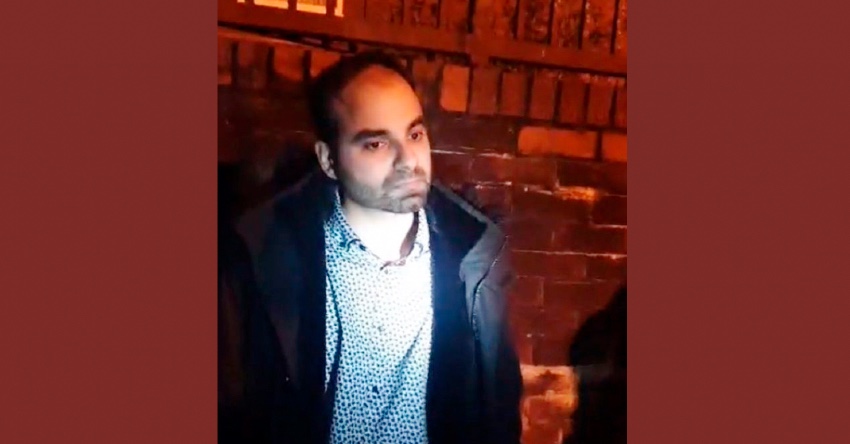 Paedophile hunters cornered a taxi driver from south Manchester who had driven nearly 50 miles to meet a '13-year-old girl' for sex.

According to the Manchester evening News, Dad Naveed Ashraf, 37, from Levenshulme, drove to Kidsgrove in North Staffordshire with a pizza for the 'girl' and was later found to have condoms and viagra in his car along with red roses and a gift bag.

However, the girl, who he had previously been messaging for several months, was in fact a decoy set up by the group Justice4Kids who then filmed him arriving at the meeting point and confronted him.

They also alerted police and the footage was passed to officers to ensure Ashraf, was put safely behind bars reports Stoke-on-TrentLive

The shocking footage begins with the exposers arriving at the scene on January 3 this year and quizzing the married dad-of-two about his online sex chats with the young girl.

In the 40-minute film - which was live-streamed on Facebook - the defendant looks sheepish as his reaction to the questioning is filmed.

One of the group says: "Today you've come all the way from Manchester to Stoke-on-Trent to order a pizza for a 13-year-old girl. And you were going back to stay at her property.

"You text the child to let them know you were in the takeaway and you were going to meet her."

Another hunter - who had a print out of the online chats - adds: "You've clearly been speaking to a 13-year-old girl knowingly. You have incited sex.

"One question I really do want to ask you. In these chat logs there was a point where you were trying to arrange to meet the child out in an open space and you were quite concerned that it was cold. And what did you say to her?

"You said 'don't worry I'll keep you warm by rubbing your bum and thighs'. I think that a coat would have been a bit better."

Ashraf finally admits he was planning to meet a child for sex which he is then told is 'statutory rape'.

He goes on to say he feels 'sad' and claims it is the first time he's ever done this. At one point he nearly faints as he goes into shock.

He says: "I feel very bad. My wife is going to be very angry. Forgive me this time. I haven't done anything before. Please. I wouldn't rape anyone. I'm ashamed of myself.

"I wasn't going to do anything, I was just going to eat pizza."

Ashraf is then told that the police are on the way as he remains with his head bowed.

At one point he breaks down in tears and repeatedly shakes his head as he's told he will be going to prison.

After nearly three quarters of an hour, two officers arrive on the scene and Ashraf is led away as the footage comes to an end.

Stoke-On-Trent Crown Court was told at Ashraf's sentencing hearing that he had asked the girl to send him pictures or herself in leggings and her private area. He also sent her pictures of sex positions.

Prosecutor Nick Tatlow said the defendant attempted to incite a 13-year-old girl to engage in sexual activity on July 29, 2019.

Then, between November 2019 and January 2020, he tried to arrange sexual activity with the 13-year-old girl from Kidsgrove, who was in fact a decoy set up by Justice4Kids.

The defendant contacted the girl and said, 'Do you want to have sex with me?'.

Mr Tatlow said: "She responded saying she was only 13. He replied saying, 'It's OK, we do gently and we use condoms'. He reassured her sex was easy with condoms."

The defendant then asked the girl about her private area and asked where they should have sex.

Mr Tatlow said: "He said they could meet at his house and he would pick her up. He sent her his mobile number on WhatsApp."

Following the defendant's arrest, his phone was analysed and google searches including, 'Is it ok to have sex with a 13-year-old girl'? were found.

Michael Goldwater, mitigating, said Ashraf, who has no previous convictions, was 'in every other way is a model citizen'' and that the offences were a 'tragedy' for him and his family.

However Judge David Fletcher said: "This is behaviour by you which is difficult to fathom.  In all other aspects of your life you live a perfectly law-abiding existence.

"You went straight in there, talking about the sexual behaviour that you wanted to have with her.

"What makes it more serious is you travelling down to North Staffordshire from South Manchester. You came down with condoms, viagra and other items."

He was also made the subject of an indefinite Sexual Harm Prevention Order and was placed on the sex offenders' register for life.