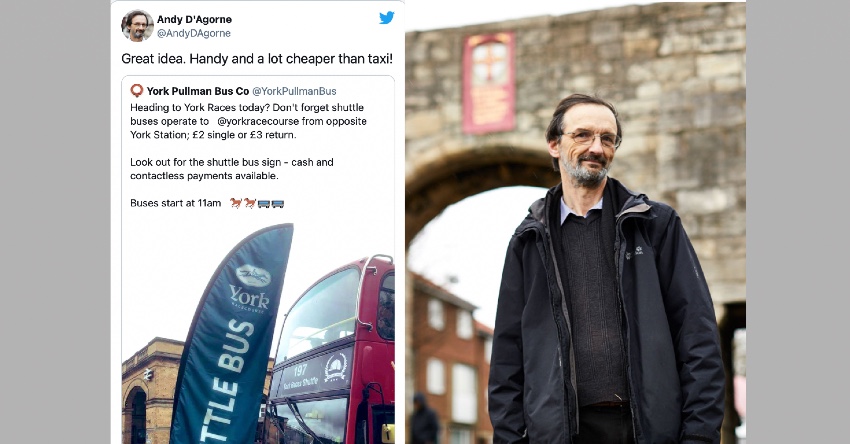 Taxi drivers in York are enraged by a tweet from the man who runs the city’s transport policy.

York Mix reports that they have called on Cllr Andy D’Agorne to apologise and consider his position in the light of public comments he made over transport to York races.

Cllr D’Agorne, who holds the transport portfolio at City of York Council, shared a post about the York Pullman shuttle bus service taking racegoers from the station to the racecourse.

He added: “Great idea. Handy and a lot cheaper than a taxi!”

Rob Sargent, chair of the York Hackney Carriage Association, said he thought Cllr D’Agorne should consider resigning over the tweet.

“He needs to seriously consider his position on the licensing committee, and his position as a councillor,” Rob told YorkMix.

“They’re elected to a position where they’re supposed to be neutral, and not have favourites in any particular trade or businesses. To show favouritism to one particular company is beyond belief.”

He described the comment as “a big slap in the face for the hackney trade especially, and for the taxi and private hire trade in general”.

“Basically that’s our transport minister, who sits on the licensing committee, promoting an independent private bus company – rather than either keeping quiet or promoting the taxi trade to work alongside them as multimodal transport solution.”

What would she like Cllr D’Agorne to do? “A public apology would really help. And he could put the words ‘working in partnership with York council’ on our side plates.”

She said the York taxi trade had been through a terrible 18 months, and race days were “the best days of the year” for many drivers.

Wendy said they were going to put in an official complaint to the standards committee about the tweet.

“We’re going to make a real statement about this because he’s completely out of order. It’s only a few words. But how shocking is it?”

Cllr D’Agorne told YorkMix: “There was no intention to offend or upset anybody. I recognise that taxis are an important part of the York transport offer.

“It was more a case of intending to promote the use of sustainable transport.

“I’m quite happy to apologise if it’s offended them. But I don’t really see that it warrants an apology to be honest.

“I don’t want to make enemies of any transport provider. It’s just a case of trying to encourage people to use public transport and I would include taxis within that.

“It was said in the context of encouraging people to use the public transport offer that’s there.”