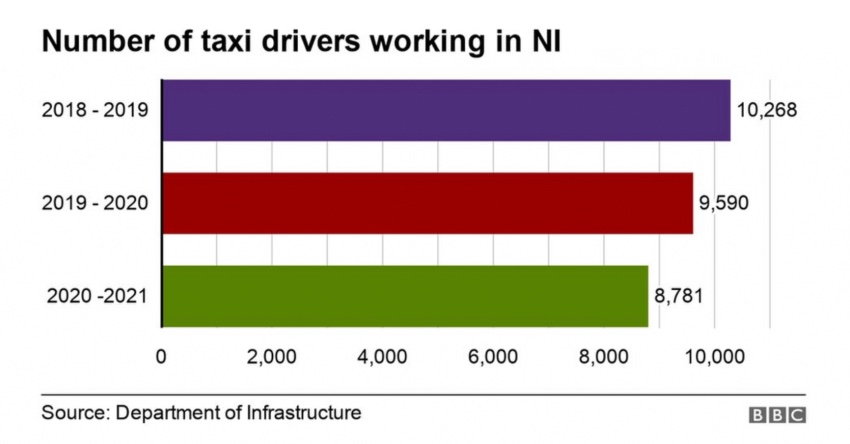 Taxi firms in northern Ireland have said a shortage of new drivers, combined with people leaving the industry, has left them unable to meet demand.

BBC News NI reports that official figures show the number of registered taxi drivers in Northern Ireland has fallen by a third in five years and the pandemic has exacerbated the issue.

Northern Ireland's largest taxi firm said it has 400 fewer drivers compared to before the pandemic.

Stephen Anton, communications manager at Fonacab, said there needs to be more incentives for drivers to join the sector.

"Now that we have come out of lockdown the amount of bookings has grown more rapidly than the amount of drivers returning. Some drivers have yet to return and we've had some say they'll wait for their second jab or for social-distancing rules to be relaxed."

He added: "Others have left the industry and have just retired, while some have gone to different driving jobs or where they could find the work.

"The major issue is at the weekends because demand is higher and because we aren't seeing a leap in drivers working. It's a stretch to cover the work that is there.

"We would like to see some sort of restart package to either help drivers back into the industry or to make it easier for drivers to join the industry," Mr Anton said.

The situation is difficult for those trying to enter the industry.

Jordan Poucher, 21, from Newry, County Down, had his practical taxi driving test delayed due to the pandemic and also struggled to pass the theory test, which took several attempts.

"The stuff they expect you to have in regards to mechanical knowledge is completely, in my view, unnecessary," he told Good Morning Ulster.

Mr Poucher eventually got theory marks he needed, and two weeks ago he also passed his practical test, but he still has several other requirements to fulfil before he can begin taking paying passengers, including 35 hours of periodic training, a medical and a criminal record check.

He estimated that so far, he has spent up to £700 on test fees, extra lessons and other training costs and said he "can't see any incentive" for budding drivers to apply for their licence.

BBC News NI has been told that some drivers have found employment at delivery companies, supermarkets and within the construction industry.

It is understood the number of working drivers could be lower than the number reflected in the latest figures.

The struggle to find drivers is not unique to large cities.

In Coleraine, County Londonderry, Royal Cabs owner William McDonald told BBC News NI his firm had lost a third of its drivers over the last 14 months.

Many taxi operators are trying to hire new drivers but recruitment is being hampered by recent changes to the testing system, according to Eamonn O'Donnell, manager of North West Taxi Proprietors.

"We need a process at the minute that gets people into the taxi industry much quicker - the new system takes about six months to get a single person through," Mr O'Donnell told Good Morning Ulster.

"They've really made it much too difficult... the old system which worked for 30 years took about six to 10 weeks.

"Now, what we're asking for is for the minister to have a tactical suspension of the new system as part of a post-Covid recovery package for the taxi industry."

He said taxi drivers and operators were "a key part of our economy" but argued they had not received enough support to stay in business during the pandemic.

"I feel in some ways that taxi drivers and the operators have been forgotten in relation to this, and people are now seeing the impact of that."