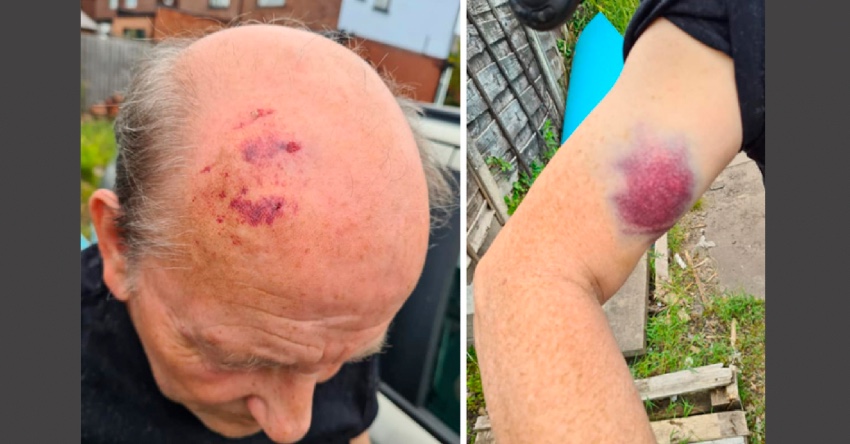 A granddad who “wouldn’t hurt a fly” has been left battered and bruised after being violently set upon in an unprovoked attack at a PHV booking office in Prestwich, Bury.

According to the Manchester Evening News, Alan Walker suffered cuts and severe bruising following the assault in the early hours of Sunday morning, 6 June.

The 68-year-old was working in a locked staff area behind a screen when the incident happened. Mr Walker was well into his night shift when a man came in asking for a taxi at around 12.30am.

Mr Walker explained there were no vehicles free at that time due to it being a busy evening, but the customer decided to stay at the offices.

Around ten minutes later, he said the customer approached the screen and asked where his taxi was. Mr Walker calmly explained again that no taxis would be available for some time.

He says the customer then “went bananas” and kicked down the door separating the staff office and public area.

He began punching the grandfather-of-one – who suffers with a chronic heart disease – repeatedly in his head and body.

To protect himself, Mr Walker, who helps out at the Poppythorn Lane booking office several times a week to keep himself active, says he let the man beat him.

The incident led to him suffering an angina attack.

Speaking to the Manchester Evening News , his daughter, Victoria Walker, said: “We’re just really saddened by it. It’s sad that such a kind and gentle dad and grandad has been attacked for no reason because the guy couldn’t get a taxi.

“That’s what it boils down to.”

Mr Walker was taken to hospital for checks and has been left “shaken” by the incident. He no longer feels comfortable working at the booking office and is unsure when he can return.

A spokesperson for Greater Manchester Police said: "Officers were called to reports of an assault at Poppythorn Lane, Prestwich, that occurred at around 12.30am on June 6, 2021.

"Three men tried to book a taxi and one has then assaulted a 68-year-old employee, who needed hospital treatment for cuts and bruises to his head and ear.

"The offender is described as approximately 60 years old, white, around 5ft 9in tall with a muscular build, bald, tattoos down his arms and wearing white T-shirt.

"Enquiries are ongoing and there have been no arrests."

Alternatively report online or by using the LiveChat function at www.gmp.police.uk.