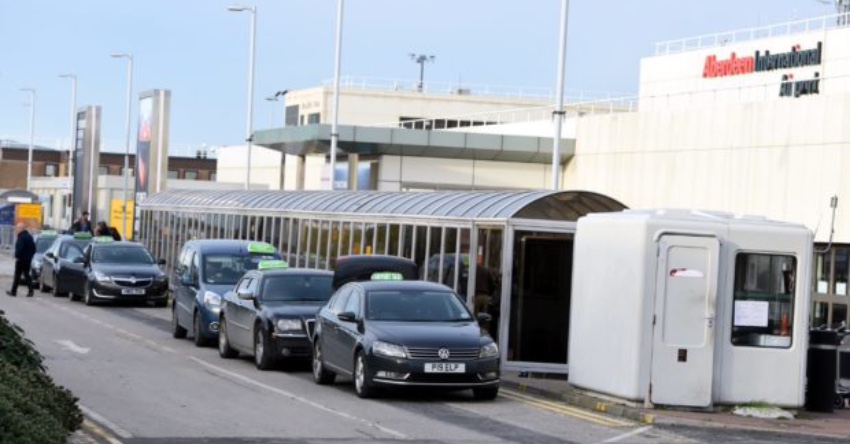 The Evening Express reports that members of Aberdeen City Council's licensing committee will next week discuss plans to abolish the current zoning system and introduce one licence covering the whole local authority area.

Council staff carried out a public consultation earlier this year, with 101 of 149 responses in favour of the proposal.

The airport operates a “risk-based management system” which requires all drivers accessing the inner forecourt to be registered.

He said: “Our main concern is the policy change will compromise our high levels of site-specific safety and security measures.

“Our risk-based management system, known as SEMS, outlines measures to have all known suppliers accessing the inner forecourt including the taxi fleet. It is key for the airport to retain the dedicated fleet on this basis.”

He added: “In addition to controlling access, each airport driver signs up to airport-specific terms and conditions – in addition to those that are part of obtaining a local taxi licence.

“This includes the airport’s security procedures such as reporting unattended luggage and vehicles and awareness of suspicious passengers.

“If all other taxis were to access the airport, it would be insisted they would need to also sign up to these terms and conditions along with the existing fleet.

“This would cause additional work and costs from AIAL’s perspective.”

Mr Beveridge also expressed concerns over the impact of drivers servicing the heliports close to the airport.

It is feared the loss of a “dedicated fleet” of taxis could lead to increased waiting times for those arriving in Aberdeen.

During peak times, up to 500 passengers can arrive at the airport within 30 minutes of each other.

Mr Beveridge added the loss of specific airport taxis would have a “detrimental impact” on passengers.

Concerns were also expressed in the responses to the public consultation, with taxi driver Derek McBride claiming the move would lead to “anarchy” with drivers arguing over fares.

Others expressed fears the airport rank could be “abandoned” in the evenings in favour of the busier city centre.

A report on the issue, which will go before the licensing committee next week, reads: “It should be noted however that the rank at the airport is a private rank and access to it would remain in the control of the airport, as is the case for the rank at the railway station.

“It would be within their remit to require availability of vehicles at certain times as part of the conditions of access to the rank.”

Councillors will be asked to approve the changes to the policy in principle, with a further report to come back to a future committee.