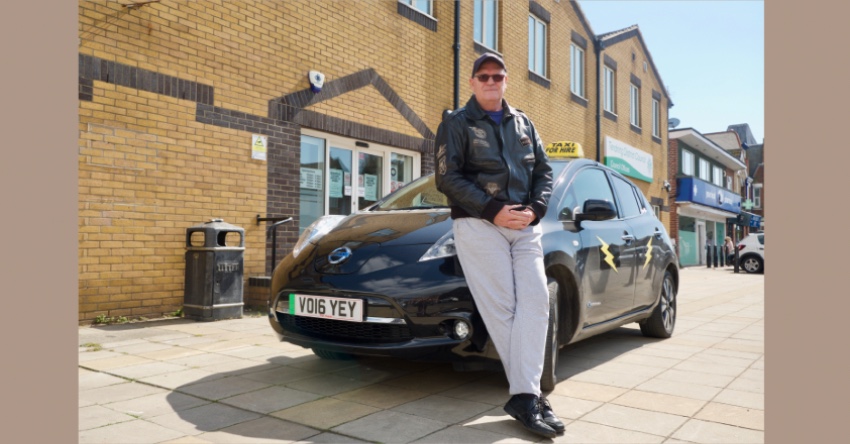 A cabbie has become the first in Tendring to ply his trade with an all-electric vehicle.

Although some cabs in the district are hybrids, it is the first all-electric vehicle to get taxi plates. Vehicles with a low CO2 emission can be licensed for up to 13 years, rather than 12 years, in an effort to encourage the use of environmentally friendly vehicles.

Mr Bennett, from Colchester, founded the TDTA 11 years ago and said the benefits for both taxi drivers and the environment were huge.

“Electric vehicles will take off; I know some people are sceptical but I know I have made the right decision, they are definitely going to be the future,” said Mr Bennett, aged 69.

“I get free charging at dealerships so I won’t be paying a penny for fuel, which is a big thing in this business. There’s no road tax, and if you go to a congestion charge area no fee there either – I don’t think there is a disadvantage.

“Price was a motivation for me, but I’m also pleased to be doing my little bit for the planet too.

“Before getting the new car I have been talking to customers about it, and everyone has said it is an excellent idea, there has been no negative feedback at all.”

TDC declared a Climate Emergency in August 2019 and has an Action Plan to reach its target of being net zero carbon by 2030. Although this target is for the authority, there is also a clear ambition to encourage the Tendring district to also work together to address climate change.

Michael Talbot, TDC Cabinet Member for Environment and lead member for Climate Change, said he hoped this was the start of a trend.

“While we’re working hard to tackle our own carbon emissions, the issue of climate change is bigger than just the council,” Cllr Talbot said.

“To be truly effective we need global action – but we really want to see Tendring leading the way and get everyone in our district playing their part, both residents and businesses.

“I applaud Mr Bennett’s move to switch to an electric taxi as a prime example of the kind of move businesses – or citizens – could take to help reduce carbon emissions, and as he has outlined see benefits for themselves too.”

Since Mr Bennett received his new licence plates, a second taxi driver in the district has had an all-electric vehicle licensed too.