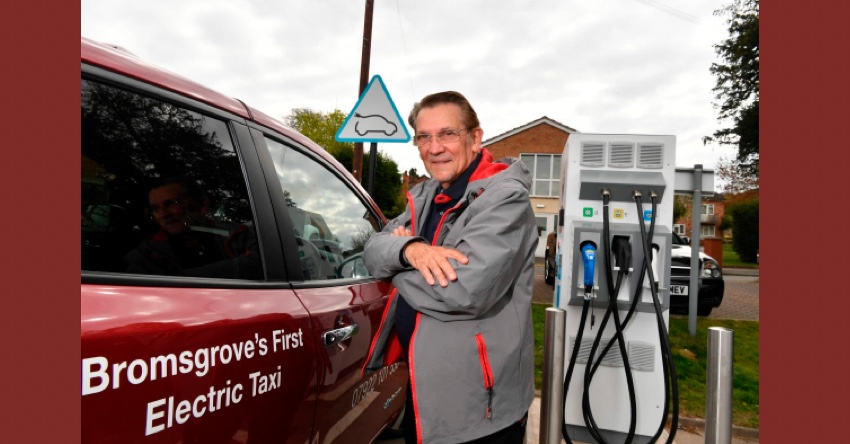 Drivers of electric taxis and PHVs can now get free charging in Bromsgrove and the public can also boost their vehicles after ENGIE unveiled its first ‘contactless charging point’ in the country.

According to the Bromsgrove Standard, the latest GeniePoint Network rapid charger – which has two points – was unveiled on 27 April at the Windsor Street Car Park and comes about through a partnership between ENGIE and Bromsgrove District Council.

To support Bromsgrove’s Ultra Low Emissions Strategy, the EV charging network in the district will have 13 machines in place when it is completed.

The rollout is thanks to £300,000 funding awarded to the district council from the Governments’ Ultra Low Emission Taxi Infrastructure Scheme.

The district council’s registered taxi and PHV drivers will be able to charge their EVs free for the first year with substantial discounts for the next nine years.

It is hoped the move will encourage more motorists to make the switch to electric as insufficient public charging points locally, and nationally, has been one issue deterring drivers from ditching the diesel or petrol.

Manos Passaris, who was the first taxi driver inn Bromsgrove to go electric in 2004, said the savings were amazing – he cut his fuel bill from £7,000 per year to £700 worth electricity.

Once the outlay for the EV has been made, other benefits include cheaper ‘all-in’ services for around £100-per-year and no road tax.

He said: “It will make a huge difference to me as I usually have to go home to charge and now I don’t need to.”

Another EV taxi driver, Peter Butler, said since he got his electric vehicle three-and-a-half years ago it had been a struggle to find chargers until this new point and two others in the district became available.

He added: “It’s been an ongoing crusade led by Manos and luckily for us, the council got involved, the grant was awarded and this is going to be a great improvement for everyone in Bromsgrove.”

His car, an older model, only does 100 miles to a full charge and he previously had to go to Redditch to recharge which meant he’d lost ten per cent of his power by the time he got back.

The pair criticised the way chargers in other areas were all on different networks and they had to keep downloading different apps.

Dee Humphries, MD of ENGIE EV Solutions, said it would be the ‘first of many contactless machines on the GeniePoint Network’.

Judith Willis, head of service covering Bromsgrove District Council’s Climate Change processes, said she was very proud of the work done by officers and partners ENGIE and BMM Energy Solutions and it was a huge step towards implementing clean transport options.”

“The new installations mean you’ll never be too far away from a charger should you need it.”