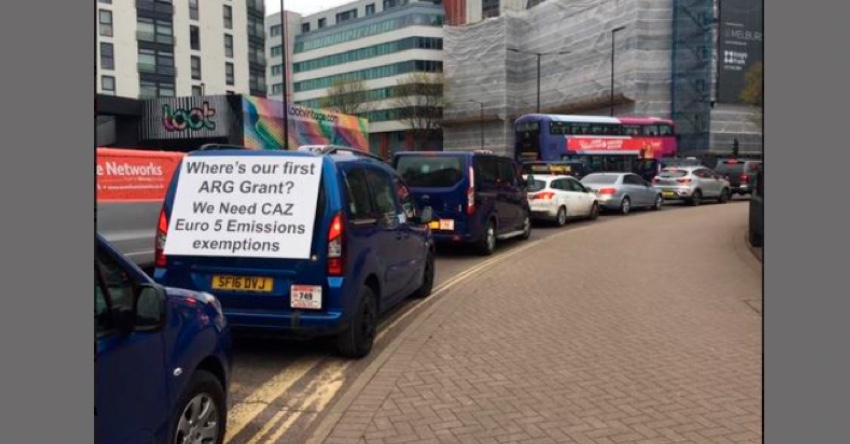 Dozens of taxi drivers gathered in Bristol on Wednesday 7 April and caused gridlock in the city centre with a slow-moving blockade protest.

The Bristol Blue hackney carriage drivers lead the demonstration, but private hire vehicle drivers were also invited to join in.

The cabbies say they have three grievances with Bristol City Council and will stop picking up fares. They blocked The Bearpit roundabout causing traffic to reach a standstill. The protest convoy then left the roundabout and headed on a loop down to The Centre, up Park Street, around Clifton Triangle and back again.

The first issue the drivers have is with the way the council handled payments of the ARG - the Additional Restrictions Grant. This is money given by the Government to self-employed people whose incomes have been badly affected by coronavirus lockdown.

Many drivers say the ARG has not been distributed fairly. They say they were unable to make the first claim, missed the tight deadlines and have been left on the breadline as custom is still hugely down in the city centre.

The second issue is about the ongoing controversy regarding a taxi rank outside the Bristol Hippodrome on St Augustine’s Parade. Last year, Bristol City Council closed the rank down claiming it was unsafe. In late October last year, taxi drivers held a convoy protest about the rank, after a number of drivers were fined for stopping there and picking up fares.

Finally, the cabbies also want exemption from the proposed Clean Air Zone which will mean the owners of all diesel vehicles and some older petrol vehicles will have to pay a charge for driving in or near the city centre.

A spokesperson for Bristol City Council said: “We have worked with the trade representatives to install an evening/ late night rank with a new shelter and improved signage 50 meters away from the Hippodrome.

“A new larger rank with shelter and signage opposite the Cenotaph has also been installed. However, we have been clear that the concerns for public safety and congestion issues outside the Hippodrome make it an unsafe location for a taxi rank.

“Proposals to support those with non-compliant vehicles are included as part of our Clean Air Zone Full Business Case, including help for taxi drivers to upgrade vehicles that don’t meet emissions standards.

“We will share more information about exemptions and the financial support that will be in place to help people switch to a cleaner vehicles once our business case is approved.

“There were initial delays in sending out some ARG payments, but all those eligible were paid, with the scheme promoted widely to all eligible businesses, sole traders and self-employed for the same period.

“It was not possible to backdate grant payments, which applies to all businesses. Those who applied for the first round of ARG in November will be eligible for two payments (£1,000 + £1,686) and those who applied under the second round (just closed) eligible for one payment of £1,686.

“Applications to the Discretionary grant are currently closed. We are working through the latest applications and assessing these against the scheme criteria. We anticipate there will be some remaining funds at the end of this process. If funds remain, it is our intention to distribute these as fairly as possible across all ARG applicants."

Organisers of the protest have apologised for the inconvenience caused. One cabbie told ITV News: “We’re not earning. We’re just suffering really.”

Another added: “What we do normally in a day, we’re now doing in a week. It’s very hard for drivers. We can’t pay the bills”

When one driver was asked if the protest was causing too much disruption, he replied: “I’m sorry if it is, but we have to make our point because we’ve really been pushed to the brink. Drivers are leaving in large numbers.”