TAXIS AND PHVS DAMAGED IN TERRIFYING ATTACKS ON BRADFORD ESTATE 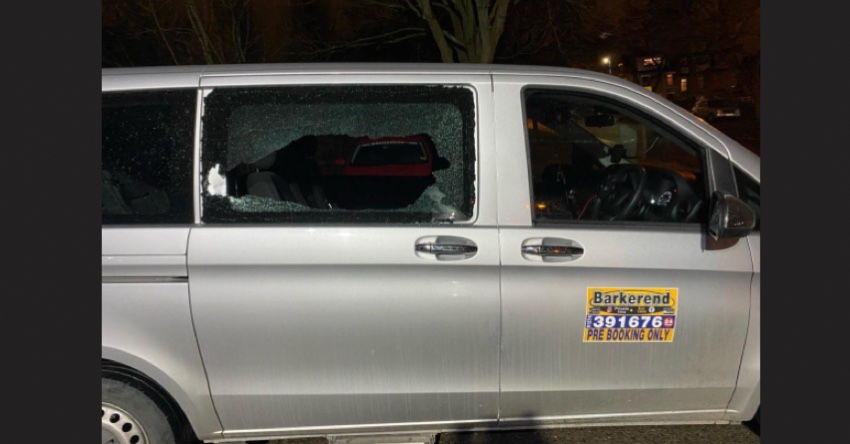 Attacks using bricks and stones damaged multiple taxis and PHVs on the Holme Wood estate in Bradford on Friday 19 February.

According to the Telegraph and Argus, police branded the attacks “completely unacceptable” and a Bradford PH firm manager claimed his company’s vehicles were not the only ones subjected to a terrifying attack.

Tawheed Ghazanfar, manager of Barkerend Private Hire, claimed: “Two of our cars have been smashed up on Broadstone Way, but when I reported it to the police they told me ten taxis had been attacked with bricks and stones that night.

“The driver of our minibus was scared when they were throwing bricks and stones,” said Mr Ghazanfar. “Fortunately he was not injured because he was inside the vehicle, but he’s been off for three days.

“All he was doing was dropping off a customer. It’s not safe when they are throwing bricks. I worry about our customers.

“The windscreens and side windows have been smashed and a stone put a dent in the body of the vehicle.

Mr Ghazanfar said while the firm’s insurance would have covered the damage, he said the driver was keen to get his vehicle back on the road so he paid money out his own pocket to have his vehicle repaired.

“When our PHVs are damaged in attacks like this, it can cause thousands and thousands of pounds in damage.

“My dad has been in the game for 33 years and he’s never seen anything like this before. There is no respect to the cabbies at all."

Mr Ghazanfar asked if police could install CCTV cameras and step up patrols in the area, particularly between 6pm and 10pm when he claimed most problems occur.

But he did say the firm would continue to send its PHVs there. “Holme Wood is the biggest estate in West Yorkshire and we can’t not send PHVs around.

“This is not the first time this has happened,” added Mr Ghazanfar, who claimed problems on Broadstone Way have been happening for the last ten to 15 years.

“Broadstone Way is the only entrance or exit to Holme Wood, so it’s hard to avoid it.”

Inspector Andy Thornton, head of the Bradford South Neighbourhood Policing Team, said: “This type of criminal and anti-social behaviour is completely unacceptable and presents obvious dangers to drivers, passengers and other road users.

“We remain committed to working closely alongside our partner agencies and the taxi operators to do everything we can to tackle these issues.

“Neighbourhood patrols have been stepped up in the area along with street cleaning teams to get rid of rocks and stones.

“We are working with our partners carrying out intervention work with these youths to reduce anti-social behaviour.

“Where crimes are committed they will be thoroughly investigated and anyone involved in these type of offences we will take appropriate action against them.

"We will also be continuing the work we do with youth organisations to get across how dangerous stone throwing incidents are and the serious consequences that can result from this type of behaviour.”