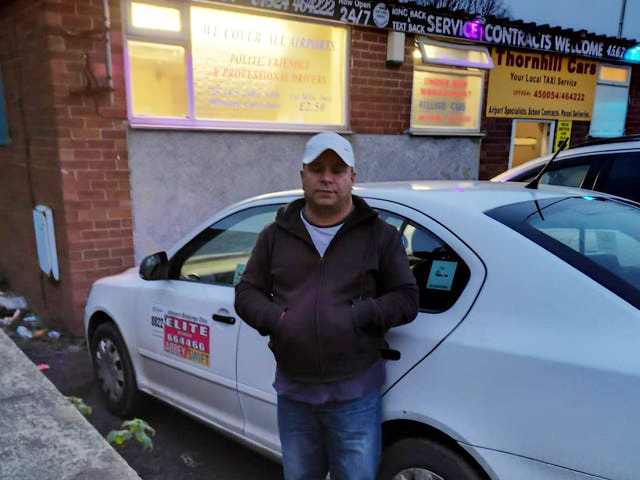 Taxi drivers struggling to make a living during the pandemic have been hit by a spate of frightening attacks and robberies.

According to the Dewsbury Reporter, drivers are reporting more and more incidents which are threatening to force them off the road for good.

Drivers have seen their incomes decimated since March last year but now a rise in attacks has hit the trade hard. One taxi firm has reported at least five incidents over the last few weeks – including two knifepoint robberies.

Most of the attacks have happened in and around Dewsbury.

One driver, Ashraf Mahmood (pictured), picked up a man in Thornhill who pulled a knife, hurled racist abuse and threatened to kill him before demanding his money bag. The attacker fled with the cash.

In another incident Liaqat Hussain was going to Dewsbury Moor and when the cab arrived the passenger got out and threatened the driver through the front window.

The man pulled open the driver’s door and brandished a knife. Mr Hussain managed to kick the attacker away, slammed the door and drove off.

In a third incident Muhammad Yaqub took a female passenger from Wakefield to Thornhill. When they arrived a man was waiting as if to pay – but then he made some small talk, shoved the driver and grabbed his money bag.

There was another report of a taxi driver leaving his car to help an elderly customer back into her house. The driver was surrounded by “kids on bikes” – some with knives – demanding cash. The driver escaped back to his car and drove off.

The drivers all work for Abbey Swift Cars in Heckmondwike and a spokesman said: “We have had five incidents now and at least two involved knives.

“What happened has been very traumatic for the drivers involved. Our drivers are working hard to provide for their families and help the community and this is how they are treated.

“If people have any information they should contact the police.”