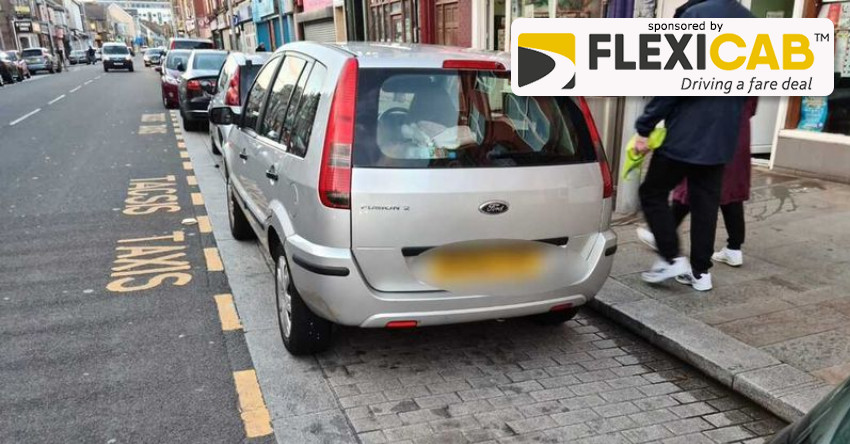 According to WalesOnLine, taxi drivers in Port Talbot claim they are experiencing road rage abuse because people keep parking on the rank, forcing them into the middle of the road.

Drivers said their problems started a year ago when their rank was moved from a lane just of Station Road to the main road.  During the day, there is a designated taxi rank for three or four taxis in Station Road outside Pizza Factory. After 6pm, the whole road becomes a taxi rank.

Neil Rigdon, of Neil's Taxi, regularly uses the rank and said he'd had enough of the constant abuse.

He said: "People are pulling into the rank so we can't get on it and we're having to put our hazard lights on and stop in the middle of the road until a space becomes available.

"When somebody comes back to their car, we have to reverse, let them out and then we can move into their space.

"People are fed up that we are stopped in the middle of Station Road, but so are we. We get people regularly swearing at us and beeping at us."

But he said an incident that happened on October 4 had been the final straw for him.

He said: "Someone was arguing with me through my window so I got out to explain I had nowhere to go, I couldn't help it. He put his car into reverse as if he was going to drive into me, to intimidate me.

"A lot of drivers are too scared to go to the rank and we shouldn't have to feel nervous to go and do our job. You don't know what people are carrying these days.

"You say to someone nicely 'this is a taxi rank, you can't park here' and I can't tell you some of the language we get back."

He said the abuse felt particularly demoralising at a time when many taxi drivers were struggling to get customers.

"We wish the taxi rank could go back to where it was, in the lane outside Brian's Fish Bar - we were out the way there.

"Before lockdown, a few of us taxi drivers had a meeting with the council and they agreed to get a van out to monitor and fine people, and they did, but I haven't seen it around since. If the council has put something in place, they should make sure it works for us."

A second taxi driver, who wished to remain anonymous, claimed one angry driver tried to punch him for being in the middle of the road on Saturday evening, September 26.

"I was stopped in the middle of the road, because there was no space and a man was trying to come down the road. I told him to go around me and he started hurling abuse at me and got out of his car.

"I went to shut my window but he pushed it down and tried to grab my keys and then my phone. He swung for me and missed. It was scary and it is annoying to deal with. All we want to do is go to work and do our job without the abuse every day. "

According to South Wales Police, the force has increased patrols in the area.

A Neath Port Talbot Council spokesman said: “We’re working hard to address concerns expressed by taxi drivers in relation to the rank though for highway safety reasons there are no alternative locations.

“There is conflict for places at the rank with people calling in for takeaways and delivery vehicles parking on the rank. Our staff were at the site in January, February and March this year when they effectively acted as ‘taxi marshals’.

"The council’s enforcement van has also undertaken regular inspections. Now nightlife has resumed we’re again working to resolve matters and identify solutions to address the concerns of those involved which may involve extensions of the taxi rank, further regular visits from enforcement vans and engaging with taxi associations to identify concerns.”