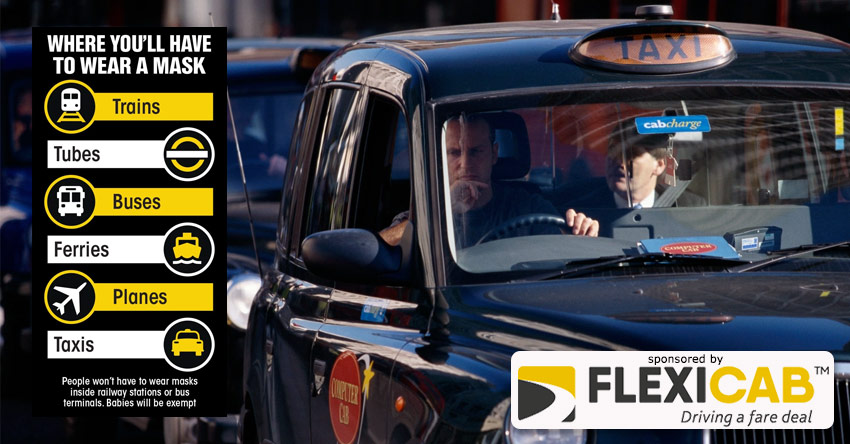 TAXI drivers said today they will refuse to carry passengers who are not wearing masks.

Face coverings on public transport will be compulsory from June 15 in England on buses, trains and tubes to help stop the spread of coronavirus - but taxis were left off.

British Transport Police will have powers allowing them to issue on-the-spot fines to rule breakers. Young children, the disabled and those with breathing difficulties will be exempt.

And the National  Private Hire & Taxi Association says it wasn't even informed of the change.

Now it is urging drivers not to pick up customers if they are not wearing a mask and have slammed the government for a lack of clear guidance.

The National Private Hire & Taxi Association says it was annoyed taxis were not included in the announcement and says it has been contacting the government for advice and guidance over drivers since the pandemic started.

Several drivers have died from Covid since the start of the pandemic.

David Lawrie, director of the association which represents drivers from every part of the taxi industry, told The Sun: “My advice to drivers would be do not pick up the customer if they are not wearing a face mask.

“Virtually every form of transport was mentioned on Thursday but taxis were not. We’ve contacted the government, ministers and the Department of Transport and we’ve heard nothing back.

“It’s disgusting. We’re an integral part of the transport infrastructure and we’ve not been included.

“I would urge taxi drivers to wear face masks as well. It reduces the risk of spreading it. Drivers have the right to refuse a fare if there are reasonable grounds and if the customer isn’t wearing a mask I’d say that’s reasonable grounds. I would say they should not accept that customer.

“You’re in an enclosed space in a taxi.

“Drivers are cleaning their vehicle at the end of every journey and have brought in other measures but this has not come from the government.
"People are dying and we’ve not received any real advice.

“They’ve ignored my communication. Drivers have been driving key workers around during this pandemic so this is very important.”

The new rules on wearing face masks on public transport will come in when non-essential shops are likely to reopen. It will not apply to people entering shops.

Police will be given new powers to issue on-the-spot fines to any bare-faced rule-breakers.

The Department of Transport confirmed to The Sun that taxis are not included in the new rules.

A spokesperson said: "Taxis are not included in the mandatory requirements primarily because they are private hire vehicles.

"Taxi drivers have a perspex screen and they can, if they want to, refuse to carry passengers.

"We advise that taxi drivers do follow the guidance but it is not a mandatory requirement as is the case on trains, busses and trams.

"The requirement only is for public transport and taxis can choose to follow the guidance - and we advise they do - but ultimately it is up to them because they have more control over their environment."