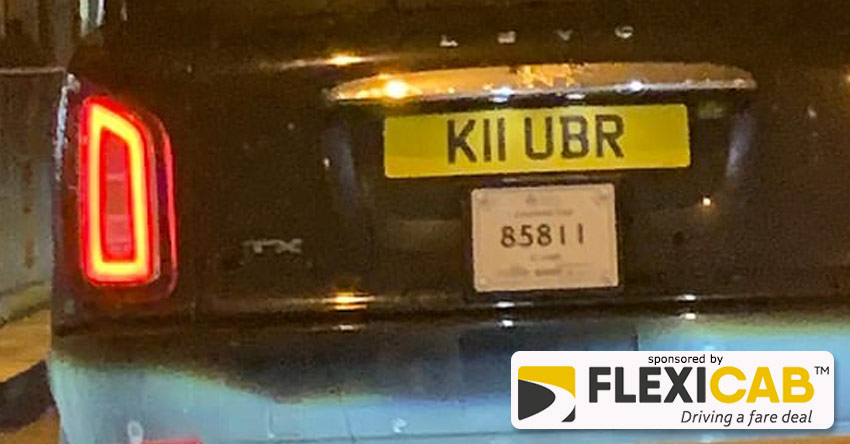 A black cab driver is being investigated for driving around the capital with a licence plate that threatened to 'Kill Uber'.

The unknown driver, who was pictured outside the Savoy Hotel in central London, left onlookers shocked with their private plate 'KII UBR' which has been interpreted as a threat to the American taxi company.

Following the sighting, Uber drivers reacted with outrage at the provocative plate and one stated the driver needed to 'step back and reflect on what's important in their life'.

Transport for London - which licences the capital's taxis - has said it is urgently investigating.

Farhan Khalid, 44, from Birmingham, who has been a minicab driver for 25 years, said: 'I find it a bit sad someone would go out of their way like this.

'If someone has it in them to go out of their way to go buy a number plate like this, I think they really need to step back and reflect on what's important in their life.

'This hate for Uber is clearly completely overpowering and consuming their life.'

He added: 'The unfortunate thing is this driver has made himself a target now.'

Kara Attila, another Uber driver from High Wycombe, Buckinghamshire, said he had only recently spotted a black cab driver with the private plate 'H8 UBR'.

The 38-year-old said: 'They blame us for stealing their jobs.

'But is not our choice, customers have decided that it is much more convenient to use 21st century technology.

'They like ordering cabs straight to their door, pub or office.

'Now it's time to either adapt, evolve or you are not going to survive.'

Graham Robinson, TfL's taxi boss, commented: 'Having been made aware of this number plate we are now conducting an urgent investigation.'

Black cabs and the private hire application Uber have been embroiled in a long-running feud with one another after the California tech company lost them earnings.

In 2019, the United Cabbies Group (UCG) lost a legal battle against Uber's 15-month operating permit in London despite the licence initially being turned down.

Uber has currently lost its licence for the capital, but can still accept passengers while it appeals the decision.