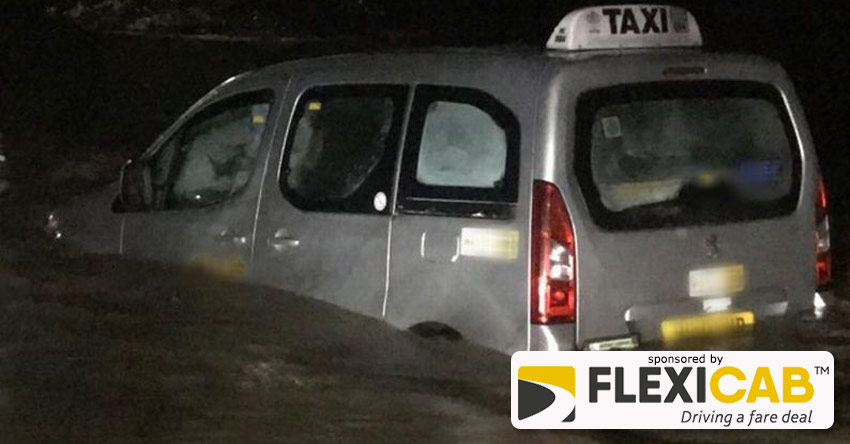 A taxi carrying passengers was reportedly ‘swept away’ by fast-flowing flood water as heavy rain brought dangerous conditions to Gloucestershire on Thursday evening.

The Environment Agency issued a ‘red’ Flood Warning for the River Chelt at Charlton Kings following the downpour.

The warning has since been removed, but river levels are being monitored.

And this taxi was understood to have been caught in the flood warning zone near School Road.

A regular Gloucestershire Live contact, who wanted to remain anonymous, sent us the pictures and said: “The taxi got dragged away going down School Road in the water.

“He had passengers on board at the time.

“Everyone got out okay.

“A few cars over the years have been caught out down there by the flood water. It was a Mini the last time, a few months back.”

According to the Environment Agency, there was a "remarkable 20 mile wide strip" of rain that brought up to 20mm to 30mm in six hours in Gloucestershire.

This meant there was "significant surface water flooding and small rivers responding rapidly."

It issued two Flood Warnings for Gloucestershire and a number of Flood Alerts - the two warnings have since been removed.

The second Flood Warning was issued for the River Frome at Stonehouse and Bridgend, with a similar message that there was a risk to life in fast-flowing and deep floodwater.

Police and the Met Office urged people to take care in the atrocious conditions that struck with no weather warning in place.

Gloucestershire police told drivers not to drive though big puddles and to be considerate of other motorists and pedestrians.

They said they had received lots of calls about localised flooding.

The Met Office also urged motorists to take care: "Heavy rain is continuing to affect parts of south Wales and southern England specially along the M4 and M5.

"Surface spray will likely cause poor visibility in places, so allow some extra time for your journeys and stay weather aware."

We were also told about severe flooding in Winchcombe, with multiple fire appliance pumping deep water.

One person, who also wished to remain anonymous, said: “At least 4 severe flood locations, including outside the doctors surgery, were the water is so high the curbs have vanished and is lapping at residents doors.

“This is the general situation across Winchcombe, with multiple residents reporting there houses being breached by water.”

We were also sent images of Lobleys Drive, were there was localised flooding near the bridge going into Coopers Edge.

While the M5 Northbound entry slip road was closed due to earlier flooding at J11A A417 for Gloucester and Cirencester. It has since reopened.

We will bring you the latest situation from 6am on Friday.