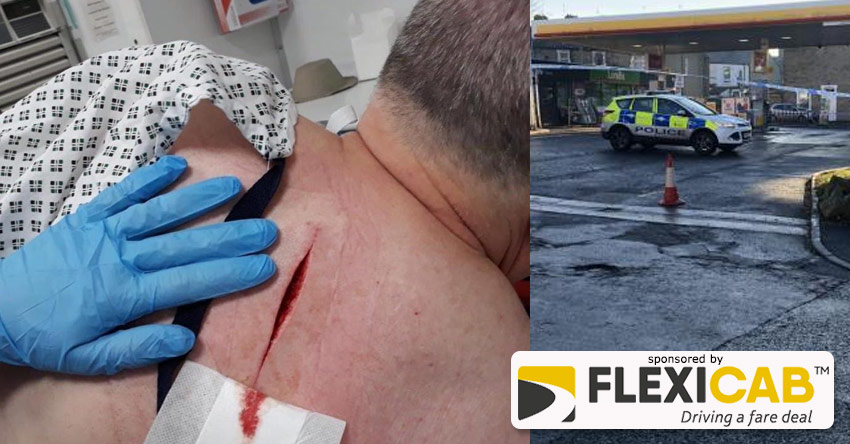 A TAXI driver was stabbed in the shoulder after an attempted robbery at a Darwen petrol station.

Police cordoned off the Shell garage in Blackburn Road this morning after the incident started at 4.30am.

The man, in his 50s and named locally as Bernard Golding, was at the station paying for petrol when he was stabbed from behind.

The taxi driver from Chippy’s Taxis was later taken to Blackpool Victoria Hospital and is now recovering at home but he is said to be in a state of shock.

They received reports of an attempted robbery at the garage where a man entered with a knife and threatened a cashier.

There was also the attack on the taxi driver and then at 4.55am reports of an attempted break-in in Hawkshaw Avenue, when a window was smashed and somebody had been seen acting suspiciously close by.

There were several police vehicles and the police helicopter scrambled as officers tried to track down the offender.

Detective Inspector Scott Waddington said: “One man has suffered a serious injury, while several other people have been left extremely shaken by this morning’s events. We also know this will have been concerning for members of the public.

“Somebody is now in custody and are enquiries are very much ongoing to establish exactly what occurred. In the meantime we will have extra patrols in the area and anybody with concerns is welcome to speak to an officer.

“As part of our enquiries we are now appealing for information from the public and would like to speak to anyone who saw all or part of any of these incidents, or was in the area at around the same time and saw something that seemed suspicious.

“We’d also ask people to get in touch with us if they have dashcam or CCTV footage which may show something useful.”

A man aged 28 and from Liverpool was arrested a short time later on suspicion robbery, criminal damage and assault. He remains in custody.

Pauline Atkinson, 66, of nearby Argyle Street, said: “I had got up at about 4.30am to get a drink and heard some shouting but I could not understand what they were saying.

“They had someone trying to steal the cash machine there once before.

“It gets to 10 o’clock at night and you don’t want to go out in case something happen.”

A 47-year-old resident on the same road, said: “The helicopter and police sirens woke everyone in our house.

“I heard a lot of commotion and people outside shouting and we wondered what was going on.

“The petrol station does not give us any hassle so feel for the people there.”

Joan Southern, 80, of Blackburn Road, said: “I heard the helicopter going overhead at about 5am. I heard that someone got hurt and my thoughts are with them.”