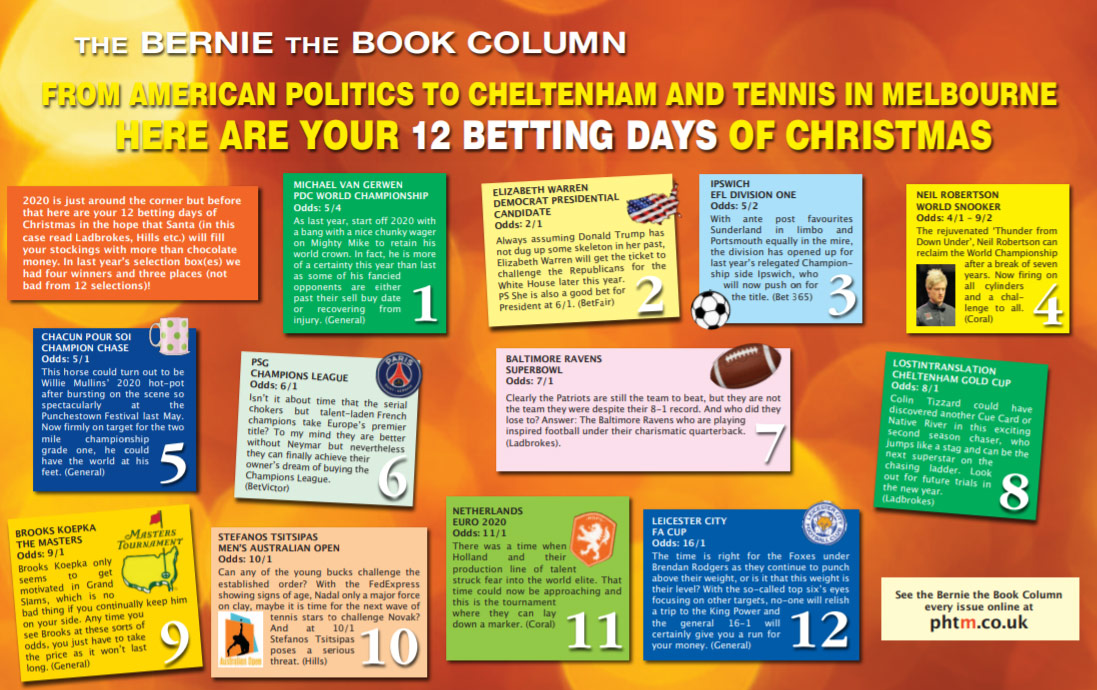 2020 is just around the corner but before that here are your 12 betting days of Christmas in the hope that Santa (in this case read Ladbrokes, Hills etc.) will fill your stockings with more than chocolate money. In last year’s selection box(es) we had four winners and three places (not bad from 12 selections)!

1: MICHAEL VAN GERWEN PDC WORLD CHAMPIONSHIP Odds: 5/4 As last year, start off 2020 with a bang with a nice chunky wager on Mighty Mike to retain his world crown. In fact, he is more of a certainty this year than last as some of his fancied opponents are either past their sell buy date or recovering from injury. (General)

2: ELIZABETH WARREN DEMOCRAT PRESIDENTIAL CANDIDATE Odds: 2/1 Always assuming Donald Trump has not dug up some skeleton in her past, Elizabeth Warren will get the ticket to challenge the Republicans for the White House later this year. PS She is also a good bet for President at 6/1. (BetFair)

3: IPSWICH EFL DIVISION ONE Odds: 5/2 With ante post favourites Sunderland in limbo and Portsmouth equally in the mire, the division has opened up for last year’s relegated Championship side Ipswich, who will now push on for the title. (Bet 365)

4: NEIL ROBERTSON WORLD SNOOKER Odds: 4/1 – 9/2 The rejuvenated ‘Thunder from Down Under’, Neil Robertson can reclaim the World Championship after a break of seven years. Now firing on all cylinders and a challenge to all. (Coral)

5: CHACUN POUR SOI CHAMPION CHASE Odds: 5/1 This horse could turn out to be Willie Mullins’ 2020 hot-pot after bursting on the scene so spectacularly at the Punchestown Festival last May. Now firmly on target for the two mile championship grade one, he could have the world at his feet. (General)

6: PSG CHAMPIONS LEAGUE Odds: 6/1 Isn’t it about time that the serial chokers but talent-laden French champions take Europe’s premier w title? To my mind they are better ithout Neymar but nevertheless they can finally achieve their owner’s dream of buying the Champions League. (BetVictor)

7: BALTIMORE RAVENS SUPERBOWL Odds: 7/1 Clearly the Patriots are still the team to beat, but they are not the team they were despite their 8-1 record. And who did they lose to? Answer: The Baltimore Ravens who are playing inspired football under their charismatic quarterback. (Ladbrokes).

8: LOSTINTRANSLATION O H dd ELTENHAM GOLD CUP odds: 8/1 d Colin Tizzard could have Native r R ed another Cue Card or second iver in this exciting jumps li season chaser, who next su ke a stag and can be the perstar on the o chasing ladder. Look t ut for future trials in he new year. (Ladbrokes)

9: BROOKS KOEPKA THE MASTERS Odds: 9/1 Brooks Koepka only seems to get motivated in Grand Slams, which is no bad thing if you continually keep him on your side. Any time you see Brooks at these sorts of odds, you just have to take the price as it won’t last long. (General)

10: STEFANOS TSITSIPAS MEN’S AUSTRALIAN OPEN Odds: 10/1 Can any of the young bucks challenge the established order? With the FedExpress showing signs of age, Nadal only a major force on clay, maybe it is time for the next wave of tennis stars to challenge Novak? And at 10/1 Stefanos Tsitsipas poses a serious threat. (Hills)

11: NETHERLANDS EURO 2020 Odds: 11/1 There was a time when Holland and their production line of talent struck fear into the world elite. That time could now be approaching and this is the tournament where they can lay down a marker. (Coral)

12: LEICESTER CITY FA CUP Odds: 16/1 The time is right for the Foxes under Brendan Rodgers as they continue to punch above their weight, or is it that this weight is their level? With the so-called top six’s eyes focusing on other targets, no-one will relish a trip to the King Power and the general 16-1 will certainly give you a run for your money. (General)