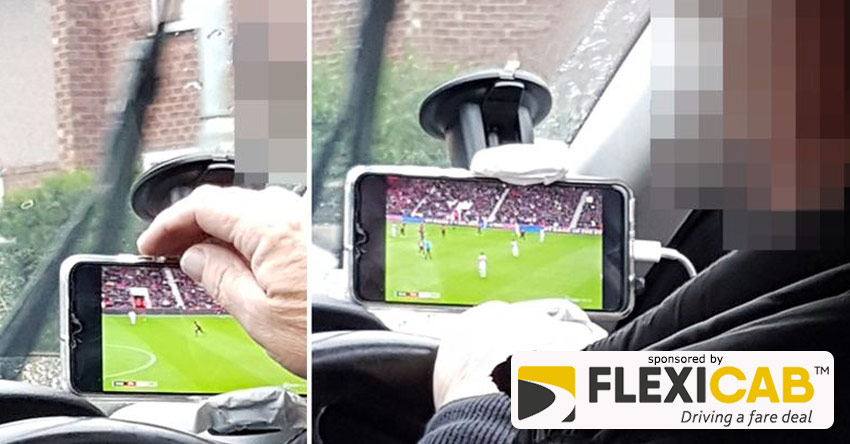 A woman was left fearing for her safety after claims a taxi driver spent an entire journey watching a Manchester United game on his phone.

Paula Neal, 31, had been travelling in a taxi booked through Club Cars in Wythenshawe, when she noticed her driver was preoccupied.

Photographs show the male driver with one hand on the steering wheel and one hand on his mobile phone, which is attached to the windscreen.

He appears to have been watching a game between Manchester United vs Bournemouth, which Paula claims was played during her journey on Saturday 2 November.

The support worker says the five minute journey from her work to the Civic Centre, left her feeling uneasy and fearing for both her own, and others safety.

"I got in the back of the taxi and the driver had his phone pinned to the windscreen and was watching the football," Paula said.

"As we started moving, I was expecting him to turn it off but he didn't and instead kept it running the whole time."

Paula says she with was with another passenger, and claims that when the pair started talking, the driver turned the volume on his phone up.

"I couldn't believe it and wasn't really quite sure how to react.

"If I had confronted him he would have had to take his hands and eyes off the road and probably his hands off the wheel. Again."

"Even though it was only five minutes, the whole journey just left me feeling really unsafe," Paula added.

"It is heavily dangerous for everyone."

Paula reported the matter to Manchester Council and says she is concerned after noticing the driver is still on the road.

"I have booked two more taxis with club cars and he's turned up as my driver," Paula fumed.

"I've had to cancel the trip because I don't feel safe getting his car."

In correspondence from Manchester Council, Paula was told there was 'insufficient evidence' to support any formal action against the driver.

The Manchester Evening News understands the driver has been given a warning in relation to the incident, but no formal action has been taken by Greater Manchester Police or Manchester Council.

A spokesperson for Manchester City Council said they do not comment on individual cases.

They added: "We robustly investigate any allegations that drivers licensed by the City Council are not upholding the standards we expect of them.

"We would encourage any passenger who is not satisfied with their experience in a Private Hire Vehicle, or Hackney Carriage, to report it to the Council's Licensing Team."

A spokesperson for Club Cars said: "Although Club Cars do not condone the actions that have been alleged, being that a private hire driver is self employed, the police and licensing authority are fully equipped to resolve these kinds of issues.

"So we support the efforts of the police and councils, in tackling these issues on a day to day basis, as they do to a high standard.

"Although we can not make contact with the individual customer during an investigation, we do hope they found the outcome appropriate."