TAXI LEAVES NORTHERN IRELAND TO PICK UP A REGULAR - 1,714 MILES AWAY 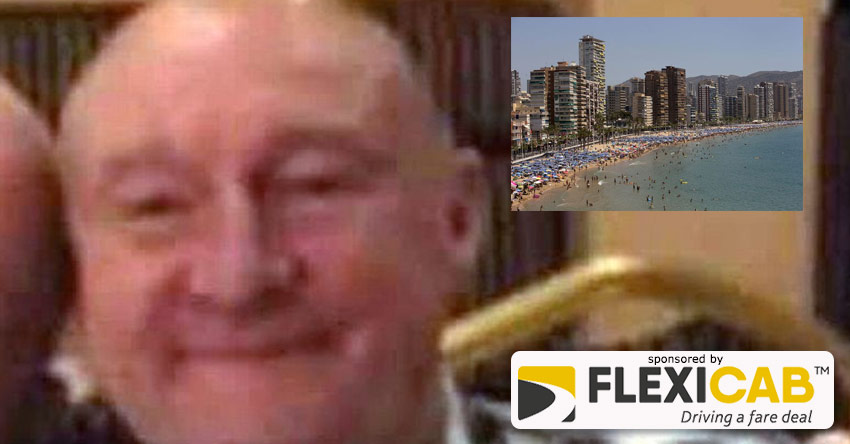 A taxi driver from Northern Ireland has set off on a 1,700 mile journey to pick up a regular customer - who was injured in Benidorm.

Phil Hamilton is on his way to the Spanish town after his pal Jim Moore suffered a head injury while on holiday last week.

Jim, 58, was declared missing for 72 hours after going on a punters' club break, Belfast Live reports.

Friends set up a search party and social media campaign to try to track him down, and Jim was eventually found in a hospital being treated for a serious head injury following a fall.

Now Phil, from 365 Taxis out of Newtownabbey, County Antrim, has agreed to turn off his meter in order to get Jim back to Northern Ireland.

And a number of friends and the taxi firm have clubbed together to cover the costs of the journey which is expected to take days.

Driver/manager Phil said: "It's just the right thing to do. Jim is out of danger but he has been advised by the medical team not to fly for a few months, so this is the best way to get him home.

"He has spent time in a Spanish hospital on his own separated from friends and family and now we'll get him in the car and we can have a good chat on the way back. I'll be driving myself but the family are keeping me company.

"It's about 1,700 miles to Benidorm so we've left Newtownabbey and are getting the ferry to Scotland and then we'll drive on down to Benidorm.

"I might just leave the sign on for a laugh for Jim to see, but the meter is off.

"It was such a relief to hear that Jim had been found after he'd been missing, and even better news that he's out of danger now.

"Jim is a regular customer of 365 taxis, and when we heard he was unable to travel by air we decided we'd send a taxi out to Spain to bring him back to Newtownabbey to reunite him with his family and friends.

"I can't wait until the next fare I get asks me, 'What's the longest taxi journey you have done?', to see their face when I say it was a waiting return from Newtownabbey to Benidorm and back.”

A spokesperson for 365 Taxis said: "He can't fly for a few months and he just wants to get home to his family.

"So we are sending a taxi. It's fair to say here at 365 Taxis we really are more than just a taxi company. Phil should arrive in Benidorm on Saturday or Sunday to pick up his passenger and we wish them all well."