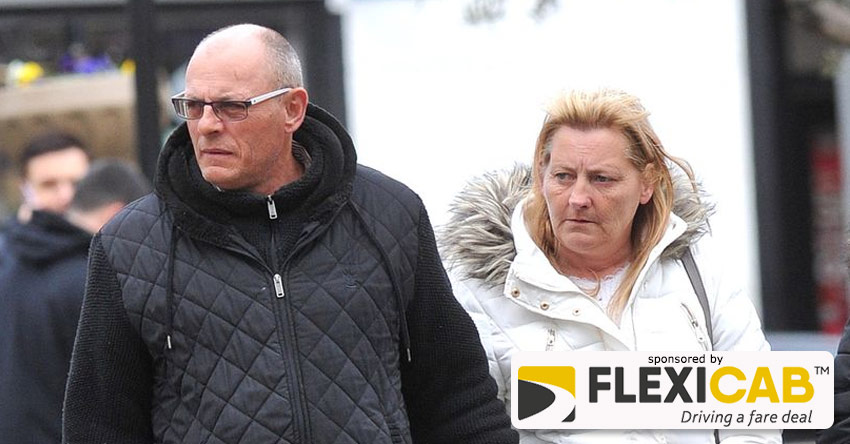 A married couple hurled racist abuse and attacked a taxi driver iafter he mistakenly picked up the wrong customer on New Year's Eve.

Stewart Benson, 50, and Dawn Benson, 53, had been celebrating at the Greenbrow Social Club in Wythenshawe on December 31 last year.

The couple left the club in the early hours of the morning and started an altercation with a taxi driver who had accidentally picked up the wrong customers.

In video footage of the incident, a woman can be heard saying 'you f*****g black c**t, go back to your own country'.

After hearing this, Judge Hilary Manley told Dawn she was 'very fortunate indeed' not to have been charged with a racially-aggravated offence.

When the taxi driver tried to explain that he was just doing his job, Stewart, a road sweeper supervisor, told him 'I'm tough, I was in a war' and punched him again in his face.

His wife ripped the indicator and wiper stalk from his car before the police were called.

Stewart Benson, of Woodland Drive, Leicester, pleaded guilty to one charge of common assault and one charge of racially-aggravated harrasment.

Stewart was jailed for seven and a half months today, but his wife walked free from court after being handed a five month sentence, suspended for two years, and 150 hours of unpaid work.

The pair, both in tears, embraced in the dock before Stewart was sent down.

'The taxi driver stood his ground - they became violent'

Prosecutor David Barley told the court how the defendants were 'milling around' outside the social club at around 2.30am.

He said the taxi driver had been scheduled to pick up a woman but had accidentally picked up an elderly couple, who had got into the vehicle and given him directions.

"He [the taxi driver] realised he had picked up the wrong customer.

"Legally, he had to go back and drop them back and collect the right customer."

When the taxi driver returned to the club to drop the elderly couple back off, though, the defendants became involved.

"Stewart takes exception to the driver dropping off this couple and says the driver is obliged to take them back", Mr Barley said.

"They had obviously had a lot to drink and he told the taxi driver he was a police officer.

"When the taxi driver stood his ground the defendants became violent and Dawn punched the driver in the mouth."

The driver tried to explain that he had to take the original customer, who was a lone female.

He tried to call the customer to prove it to the couple.

But Stewart punched him again on his top lip, grabbed his phone and threw it in a garden behind them.

As he got out of his car to get his phone back, Stewart said to him: 'I'm tough, I was in a war', and that he would 'knock him out'.

"Dawn then got involved again and punched the driver in the right eye and Stewart punched him again.

"The taxi driver managed to grab his phone and took a picture of the couple.

"Dawn got into the taxi and snapped off the wiper stick and the indicator stick.

"He was forced to delete the picture and in the end they walked off and the police arrived and arrested them."

The court heard how the taxi driver has been left 'upset' and feeling 'in pain'.

Defending Dawn, John Marsh said his client had had 'too much to drink'.

He said she was acting 'very much' out of character.

"She has never been in a court building in her life and she is extremely ashamed of being here and frightened", Mr Marsh told the court.

"This is the first time she has stepped off the straight and narrow and will certainly be the last."

David Morton, defending Stewart, said his client - who has previous convictions for driving with excess alcohol, battery and breach of a non-molestation order - had 'no recollection of the incident'.

"He had consumed an unusually large amount of Jack Daniel's whisky which clearly had a detrimental effect on his ability to act reasonably", Mr Morton added.

"He is appalled at the way in which he behaved and the way he spoke to the complainant.

"He looks upon his behaviour in utter dismay and he offers his deepest apologies to the complainant."

But Judge Hilary Manley said that only immediate custody was appropriate for Stewart because of his previous convictions and the racial element to his convictions.

Sentencing, she told the couple: "The courts will not tolerate ugly, narrow minded, racial words especially when coupled with violence.

"The victim in this case was utterly blameless and was providing a public service.

"In the video footage of the incident, it's possible to hear others telling you you were 'out of order', this is an understatement.

"This was an extremely ugly incident aggravated by the fact that you were both drunk."