FOUR MEN, TWO ARMED WITH GUNS, HELD UP A TAXI AS IT LEFT FOREST BANK PRISON 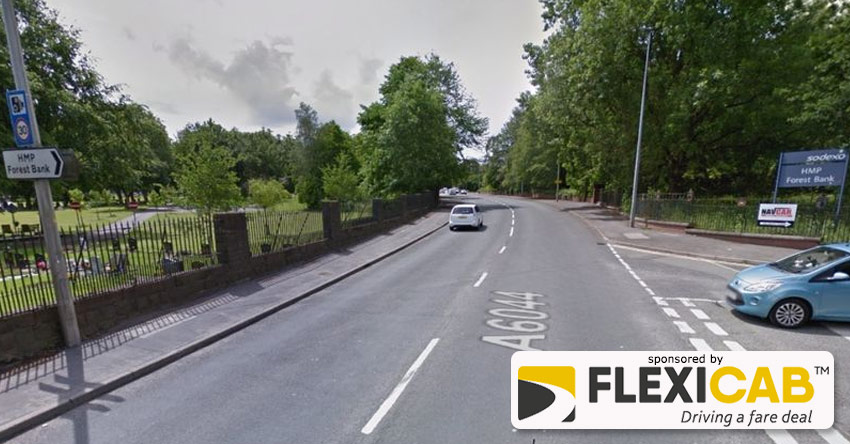 Armed would-be kidnappers swooped on the wrong man outside a Salford prison.

Four men, two armed with guns, held up a taxi as it left Forest Bank prison in Agecroft today with an ex-prisoner in it.

But after peering inside the private hire vehicle they left.

The incident happened just before 10.30am today.

One source said: "The taxi had just left the prison and was turning right to head back into Manchester. A car pulled across the taxi blocking its way.

"Two masked men got out. One with a shotgun. Inside the taxi were two members of staff from a company escorting a former prisoner to an approved accommodation, the prisoner, who had just been released, and the driver of the taxi.

"The former prisoner was being moved to a half way house. He was being escorted to it as he was deemed a high risk.

"It was very frightening for the staff and the taxi driver. The men looked inside the taxi - apparently to check the identity of the former prisoner - then backed off, and got back in their car and drove off. The assumption is that he was not the man they were after."

It is understood the incident was on Agecroft Road, near to Agecroft cemetery - opposite a service road which leads to and from the prison.

Bosses at the prison were alerted immediately after the incident in case the kidnappers' true target was about to leave.

Matt Spencer, Director at HMP Forest Bank, said: “I can confirm an incident occurred this morning outside HMP Forest Bank but it would be inappropriate to comment further while a police investigation is underway.”

In a statement GMP said: "At around 10.26am this morning (Tuesday 29 October 2019), police were called to reports of suspicious circumstances at HMP Forest Bank, Swinton.

"Initial enquiries have established that four men – at least two of which were armed with guns – surrounded a vehicle as it left the premises.

"After approaching the vehicle, the men made off.

"No injuries were reported to police and no arrests have been made.

Anyone with information should contact police on 101, quoting incident 789 of 29/10/19. Reports can also be made anonymously to the independent charity Crimestoppers on 0800 555 111.