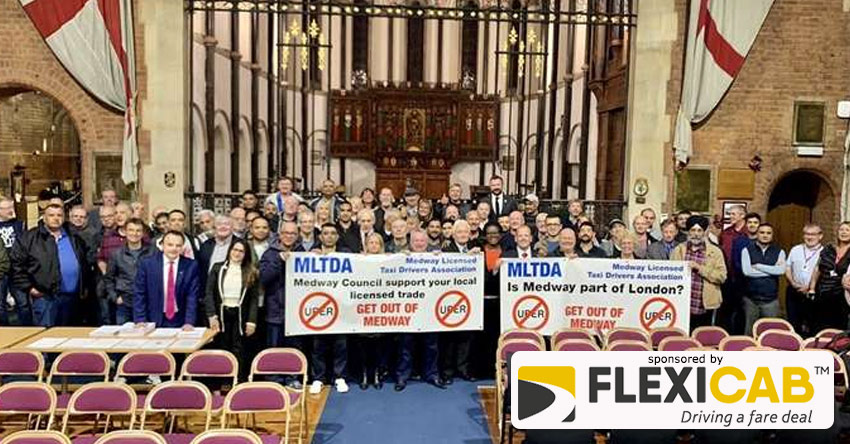 Hundreds of taxi drivers watched as a local authority agreed to support legal action against Uber.

At a Medway Council meeting last night at the St George's Centre, Pembroke Road, Chatham, it was unanimously agreed steps to remove the app driven taxi service would continue.

A motion suggested by Cllr Dan McDonald (Lab) was passed by both sides of the chamber in front of a public gallery filled with drivers from cab firms across the Towns.

This followed a council-funded legal investigation into whether the cab-hailing service could legally operate in Medway, after a motion was passed by Cllr McDonald in April.

The report stated Uber would have a case to answer in court.

Currently, the digital giant works in the Towns under a ‘Greater London’ licence issued by Transport for London.

But the Medway Licensed Taxi Drivers' Association (MLTDA) has questioned whether this is lawful.

Medway taxi drivers call for Uber to be banned

"I pay tribute to MLTDA for their evidence, patience and passion.

"Medway licensed cabs are fighting back but the council need to support them.

"They are solid and dependable, if you don’t support them, an honest service will die and Uber will put their prices up overnight.

This received rapturous applause from the audience.

The council's support means it will back - including financially - any moves to challenge Uber if the matter goes to court.

"There is no legal precedent for action like this.

We are pathfinders in trying to achieve a clear legal definition to show us how to act accordingly.

"We want to clarify the situation and try to move forward.

"The next action is in the hands of our taxi drivers and we would support them 110%.

"Each step forward is a step to finding a solution to what is an enormously emotive topic, it’s about wages and being able to work fairly.

"It may take time and it may be small steps but we’re determined to come to a legal decision."

Cllr Teresa Murray (Lab) said Uber drivers needed to be thought of as well, saying "they get a tough time, they deserve to get a fair deal.

"We can support them.

"Cab drivers pick up my 90-year-old mum for me to come round on Sunday dinner.

"They go out in the snow.

"They pick up our vulnerable and disabled children everyday and we need to be able to trust them."

After the motion was passed, Cllr McDonald said: "Politics can become toxic but there are times when it can be great for the community.

"It's a victory for all our drivers here behind us and all of the drivers here in the UK to make sure they’re here for the next 50 years."

Labour leader Cllr Vince Maple said: "Uber your time is up, you've had your chance, we're coming for you."