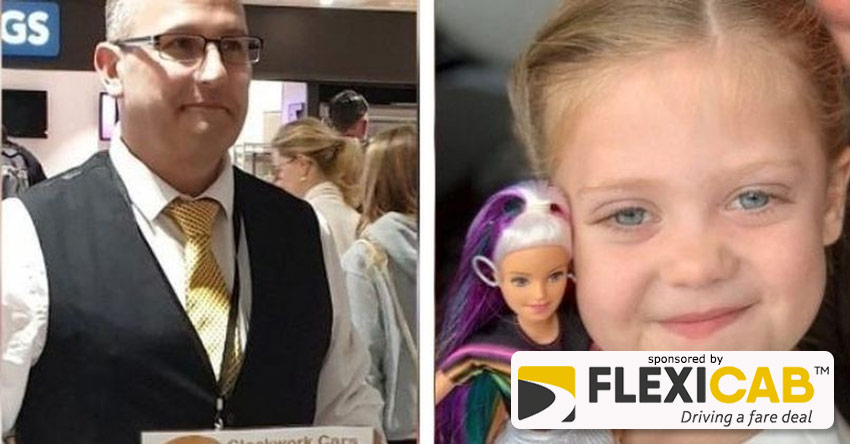 A little girl in tears after leaving her beloved Barbie doll in a taxi has had her spirits lifted by an adorable gesture from her drivers.

Isla Johnson, five, thought she had lost her favourite doll forever when she could not find it on Sunday morning (September 1).

Mum Naomi, 37, frantically searched the house for the doll, which Isla had taken to a family friend's wedding the previous day.

She got in touch with Clockwork Cars, based in Coalville, and staff said the doll was going to be returned.

But they also revealed Barbie had been on the trip of a lifetime while she and Isla were apart.

The cabbies brought Barbie back with wacky pictures they had posed for while on a job at East Midlands Airport.

She said: "We were at a friend's wedding on Saturday. We left at 11pm and as Isla is only five, she didn't realise she had dropped her Barbie.

"So I sent the taxi company a message and it was a really funny reply.

"They said that Barbie was just waiting for a chauffeur and asked when would we like her arrival to be. It was really cute.

"Isla had been really upset and there had been a lot of tears.

"We were rummaging around everywhere looking for the Barbie - even in my eight-month-old son's changing bag.

"But then they said they had found it in the taxi.

"They came and dropped the Barbie off and wouldn't accept any money for coming out again - they just seemed happy that Isla had her doll back.

"They were so lovely and I honestly cannot recommend them enough. They were great.

"You don't get a lot of places that will do that and not even accept any extra money - the whole thing was just so sweet."

Naomi, who lives in Ibstock, said staff from the taxi company posed for pictures with the Barbie at East Midlands Airport to explain what Barbie had been doing while she was away from her daughter.

A spokesman for the company wrote on Facebook: "Barbie has arrived safely and has been reunited with her little owner!

"We treat all of our passengers as VIPs, whether you are a leisure traveller or a business client.

"If anything is left in one of our vehicles, no matter how big or small, we will return it to your door free of charge. We will always go that extra mile!"