MOMENT 'BUFFOON' BLOCKED EDINBURGH TAXI OUTING BECAUSE HE GOT SOAKED 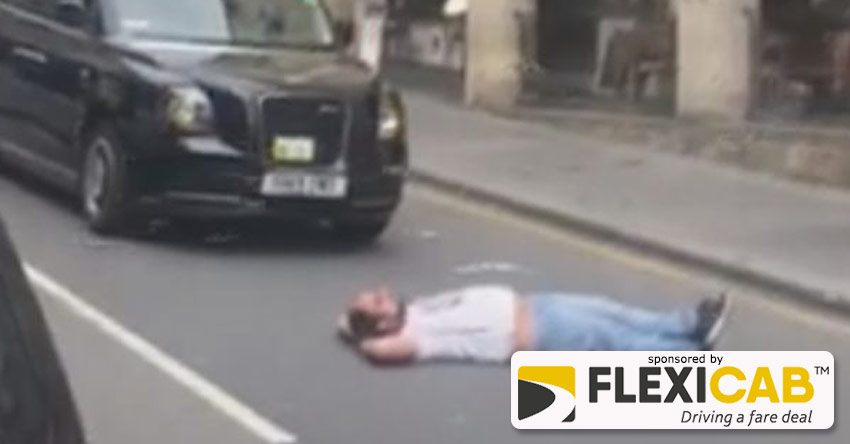 It seems one man failed to see the funny side of the Edinburgh Taxi Trade Kids' Outing, after he blocked the charity procession because he got soaked by the children.

Footage of the private hire driver lying down in the road, forcing a police motorcycle rider to ask him to move, has gone viral.

The row broke out as the taxis made their way down the Royal Mile on Tuesday. The driver has been widely mocked and branded a "buffoon" for his actions.

The annual outing is organised by the capital's taxi drivers, who treat children with special needs to a free day out to the seaside.

It's been a long-running tradition for kids in the back of the cabs to soak passers-by with Super Soakers and water bombs, and residents usually take it in good humour.

A video posted on Facebook by Sheila Purvis shows the driver run onto the road and lie down, preventing the brightly-decorated vehicles from moving any further.

When he's confronted about his actions, still lying on the ground, he says "I'm not having this - they soaked me in water deliberately."

A cab driver tries to reason with him before the police officer demands he get off the road.

His protests fall on deaf ears as he gets up, with the officer simply saying "aww" in response to his tale of being soaked.

Commenting on the video, councillor Mark Brown Tweeted: "Quite incredible scenes captured at today's Edinburgh Taxi Outing where one rival cab driver took the hump about getting skooshed (like 100's of others!) and lay down in front of the procession.

"You Sir, are a first class buffoon."