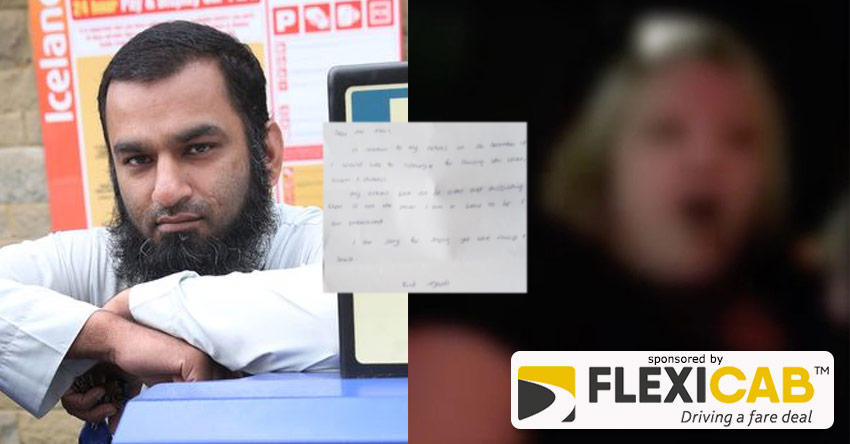 A woman who screamed abuse at a taxi driver in a Boxing Day bust-up has written him a letter of apology.

Footage shows the woman accusing driver Mian Sabir of racism and sexism, even telling him to 'die' as she and two other women were told to get out of the cab.

Footage shows the enraged woman banging on the taxi windows as her companions try to pull her back.

The driver has claimed the incident started when one of the women told him to close the van window and he refused.

It's alleged she then refused to pay, so he stopped the vehicle and told the group he wouldn't be taking them any further without payment, reports the Examiner Live .

The driver says the woman grabbed his beard as she tried to take hold of his phone.

The woman and friends were picked up at the Plumbers Arms in Huddersfield and the incident happened at Lockwood Scar.

She has now apologised as part of an 'Adult Community Resolution', a punishment aimed at first-time offenders which doesn't result in a criminal record.

Community resolutions offer offenders a 'second chance' where the offence is not serious and might be considered to be an isolated incident. 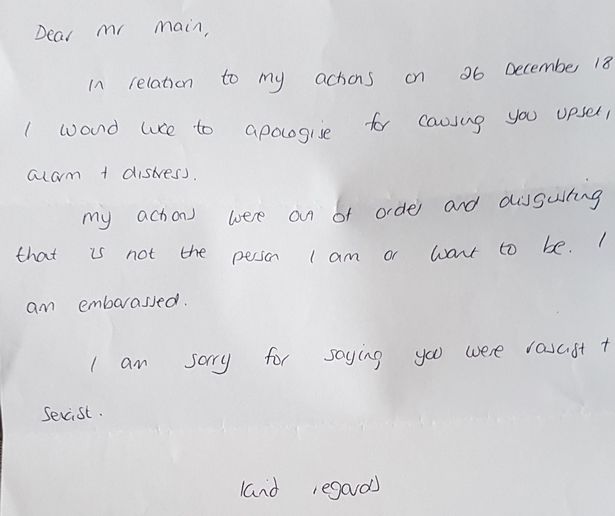 "In relation to my actions on 26 December 18, I would like to apologise for causing you upset, alarm + distress.

"My actions were out of order and disgusting - that is not the person I am or want to be. I am embarrassed.

"I am sorry for saying you were racist + sexist. Kind regards."

She signed the letter with just her first name. Mr Sabir had to pick it up from the police station and sign a form to say he accepted the matter was now resolved.

Mr Sabir, 39, who works for a Huddersfield firm, welcomed the apology and said he hoped the woman had learned her lesson.

He doesn't normally take footage of people abusing him but decided to when one of the women present had mentioned that she worked for Kirklees Council and he would face losing his licence.

"I don't usually do anything about it (abuse from customers). I normally let it go. It is unusual for older ladies (to shout abuse), it's usually younger ones."

He said some customers had made racist comments in the past but he hadn't reported it.

Asked if he thought the woman had learned her lesson, Mr Sabir said: "Well I hope so. From the apology it looks like she doesn't want to be the kind of person who is rude and aggressive."