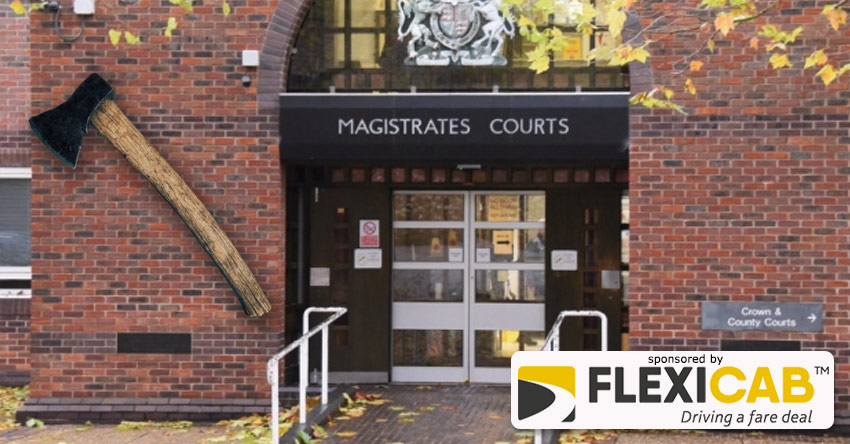 Matthew Goddard, 31, had been picked up in a taxi but did not have the money to pay for the cab and was taken to the Tesco car park in Belton, near Great Yarmouth where he was going to get some money from his cousin.

Norwich Magistrates Court heard that Goddard was asked to leave something, like a phone, in the car to ensure that he came back.

Jane Walker, prosecuting, said started shuffling about before “producing an axe from his left-hand side” and said “this is all I've got to leave you”.

Goddard got out of the taxi and ran off after he could not get the money to pay for the cab.

A few days later the court heard how Goddard had been at an address in Yarmouth when police attended.

Officers had been there to deal with another person but after seeing Goddard, who had tried to leave through the back door, went to arrest him.

Goddard failed to comply with officers who used pava spray to help try and detain him.

After his hands were placed in cuffs he thrust out towards one of the officers striking him in the face and was later tasered.

Goddard, of no fixed abode but who is currently at Peterborough Prison, appeared in court on Wednesday via videolink, when he admitted possession of an axe in a public place on January 10 this year.

He also pleaded guilty to making off without payment on the same date and assault by beating of an emergency worker, a police officer, on January 15 this year.

In addition Goddard admitted a total of six thefts of alcohol and other goods from shops in January and February this year.

Rob New, for Goddard, said he had the axe as he had been using it in the garden and offered it naively insisting it was an offence out of ignorance rather than any intent.

He said during the arrest his concern was for the officers dealing with the other person and said any offence was reckless rather than intentional.

Goddard was jailed for a total of 26 weeks and ordered to pay a total of just over £100 to three of the stores he stole from as well as the taxi driver who he made off without paying.